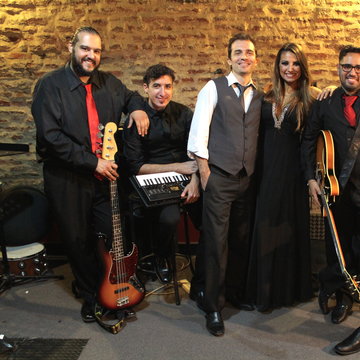 The Rockadelics (Ex Vintage Band), originally a 6 piece party band on Princess Cruises 2010 (Drums, Bass, Guitar, 2 Keyboards one of them also sang and a Singer), then later on in 2015 we also did a contract for Celebrity as a 5 piece band, now we have introduced an experienced Female Singer Giuliana Ojeda also from Buenos Aires on the vocals together with Jp. In this way the band has much broader repertoire due to its actual vocal posibilities and also more entertaining interaction. Besides from being a Party Band we have managed over the years to cover everyones musical taste ranging from Classic Jazz, to Bossa, Boleros, Latin, Disco/Funk, Clasic Rock & Roll, 80s PopRock Hits, Reggae and Modern Hits. Since this is a new version of the band we only have this most recent video, then as a reference we have also included other links with bits and pieces of other contracts..... As for our new singer she has also completed many succesful contracts with MSC, all of us have the documentation to back this up, and we also have up to date passports with C1D Visas and Seamans Book.