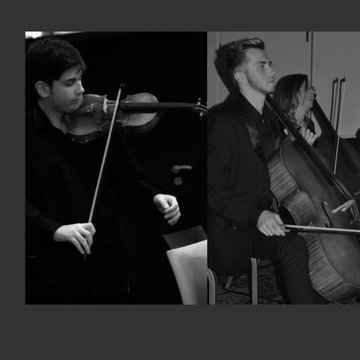 String Duo based in Greater Manchester. We can perform on request; Classical, Pop, Jazz and Folk music.
String duo
Manchester

The Petford Duo are a modern Violin and Cello duo that were formed in 2017 by two young musicians who studied at Chetham’s School of Music together. They perform all sorts of genres, varying from Classical to easy listening Jazz as well as Pop songs. The group consists of the Violinist, Alexander Petrov and Cellist, Josh Mountford - both of which study at one of the leading prestigious conservatories in the UK. Aleksandar Petrov began playing the violin at the age of 5 and in 2009 he became a student at the National School for Music and Theatrical Art "Prof. Pancho Vladigerov" Burgas-Bulgaria. Since the first days of his training, Aleksandar has revealed himself as a gifted child with excellent musical qualities. He possesses musical thinking, wonderful memory, developed hearing and rhythm. Aleksandar takes an active part in the concert life of the school thus accumulating musical experience. He is a participant in the Master classes of prominent violin players as Professor Mincho Minchev, Vesko Eshkenazi, Professor Kevork Mardirosyan, Prof. Micho Dimitrov. During his studies, Aleksandar Petrov shows himself as a tallented and perspective student. His performance enables him to achieve high results in both regional and international competitions for his age group. 2010 -Festival Miglianico - Italy – Laureate 2010 – Competition "Varban Varbanov"- Burgas - First place 2011– A soloist at Burgas State Opera 2011–A competition for German and Austrian music -Burgas- third place 2012- Competition "Emil Kamilarov"-Sofia - First place 2012 –International competition "Nedyalka Simeonova"- Haskovo - Second place 2013- First solo recital - Burgas 2013- International Competition "Pancho Vladigverov"- Shumen-Second price 2016- A soloist at the Festival in Baden Baden –Germany. 2016 - Festival "Misho Todorov "- Sliven - Special Prize of the Garo Shakliyan for best violinist. 2017 –Withgif t International Music Competition – London – Certificate with Highly Commended A participant in Levon Manukyan's orchestra "Collegium Musicum" since 2009 until now with many charity concerts in the country. In 2017 Aleksandar Petrov joined Chetham's School of Music with Tutor – Ruth Khan. Currently he is a student at Royal Northen Collage of Music ---------------------------------------------------------------------------------------------------------------------------------------- Josh Mountford is an English cellist studying at the Royal Northern College of Music under tuition by Hannah Roberts. Starting the Cello at the age of 4, Josh later joined the Birmingham Junior Conservatoire tutored by Elaine Ackers, before moving on to Chetham’s School Of Music, Manchester, where he studied under Head of Strings, Nicholas Jones. Josh has had many masterclasses with prestigious Cellists from around the world such as Steve Doane, Bruno Delepelaire, Robert Cohen, Sung-Won Yang. Performing in many prestigious venues across the UK, such as the Royal Albert Hall, Birmingham Symphony Hall, Barbican, Liverpool Philharmonic and Sage Gateshead. As well as Konzerthaus in Berlin. Josh has won many awards, most notably the Guilhermina development award and the James Langley Memorial Trust. As the current Principal Cellist of the CBSO Youth Orchestra, Josh has been involved with the orchestral environment from an early age, being part of the National Children’s Orchestra of GB, CBSO Youth Academy as well as the National Youth Orchestra of Great Britain. As well as orchestral work, Josh is actively involved with many chamber music ensembles. Currently a member of the Riedl Quartet, Josh also regularly performs with the Capriccio Quartet and Kings String Quartet. Josh has experience performing at Weddings in these quartet groups and also as a Solo Cellist. Josh is a band member of Forever Elton, who made their first outing in March 2019. He is the Strings Director of the band, featuring not only as a solo Cellist but also alongside other string players to form a larger ensemble. In February 2019, Josh featured in a collaborative project: ‘MARS VR Experience’. He performed alongside Dennis Tjiok, composer and organist, in the debut of this project. A trailer of MARS VR can be seen on the Listen page. Josh can be heard playing the cello in the feature film soundtracks to; Journey to Le Man (Patrick Stewart), Vendetta (Danny Dyer) and Breakdown (Craig Fairbrass). He also features on the upcoming soundtrack to the 2019 film Unseen, directed by Justin Edgar. He currently uses a Luthier Robin Aitchison Montagnana replica Cello and is grateful for the multiple awards he has received towards this.

Our line up is typically always a Violin and a Cello. However, can be arranged as a String Trio if requested!

We are flexible with timings, as long as they're given in advance of the day of the event. Being told of any changes ASAP would be greatly appreciated! In some cases where length of playing time is altered, a new fee may have to be agreed to suit.

We need no longer than 15-20 minutes to set up - as no electrical equipment. We just turn up with our acoustic instruments and play!

Our list is just used as a guide. Feel free to suggest others, we may have already arranged, or we'd be happy to add it to our collection!

Yes, all our playing equipment we bring along. We only require 2 armless chairs to be provided.

Yes - our set list just has examples of songs from each genre so send any specific pieces through. In case of you request a song we don't have in our collection, it is still a possibility to play it at your wedding - as long as we are told with plenty of time in advance!

We loved having Petford Duo play at our wedding! Brilliant from start to finish. Fantastic communication leading up to the event and have such a wide range of repertoire to choose from. Truly talented, professional, young musicians. Would highly recommend! Many thanks again!

I wanted to say a massive thank to you and your duo for performing at our wedding ceremony on August 31st. You were both amazing and so accommodating with times and music choice. It really helped make our day truly special and we will cherish these memories always! x

String duos in the UK