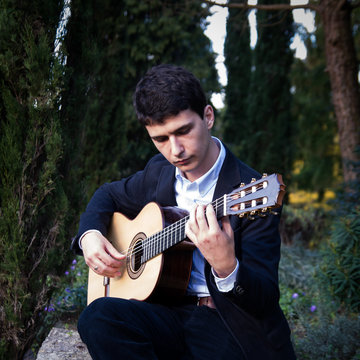 Pavel is a classical guitar performer and teacher based in London.
Classical Guitarist
Morden

Pavel started playing the guitar at the age of ten, quickly developing a passion for classical music. He graduated the National School of Music and Dance Arts in Plovdiv, Bulgaria, receiving an award for his high musical achievements. He then went on to study at the Royal Academy of Music on a full scholarship with widely respected professor Michael Lewin. Pavel has participated in masterclasses with world-renowned guitarists such as Fabio Zanon, David Russell, Marcin Dylla, Edoardo Catemario, George Vassillev to name a few, and he has met and played for the legendary Julian Bream. He has won several prizes in solo and chamber music competitions in his native Bulgaria. He has also performed live for both the Bulgarian National Radio and Television, and in venues like the Plovdiv Philharmonic House, Bulgarian National Opera, Duke’s Hall at RAM, and the House of Commons in the British Parliament. Pavel performs western classical music written for the guitar and also arrangements and transcriptions. As a teacher he works for the Da Capo Music Foundation using Kodaly and Dalcroze methods, and recently gave his first performance class at the NSMDA in Plovdiv.

Encompassing a variety of styles, his playing was very accomplished and the performance itself was focused and most engaging, with beautifully gauged variations of tonal colours and musical moods throughout.

Pavel Ralev has an ability to play music from many genres with character and originality. It is a pleasure to listen to him.