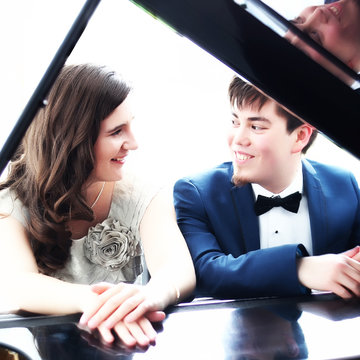 3 of 8 photos
London
Concert pianists, we provide many services from recitals to community work and private functions - a sound and professional performance.

The Passepartout Piano Duo formed in 2011. Willing to explore different styles and making a priority from creating an enjoyable performance for their audience, the duo explore through their repertoire a variety of works, ranging from classical to modern, both original compositions and transcriptions, also performing jazz and popular tunes. In the early spring of 2015 they have debuted as a piano duo at the Arcus Centre of Culture, Romania where they were also interviewed by Radio stations in the neighbouring city of Sfantu Gheorghe. Notably the duo have performed in London in the RCM, Heath Street Baptist Church, St James's Church Bushey, St. George the Martyr Notting Hill, St. Sepulchre Church, Kensington Central Library, Dartford Parish Church, in Faversham and Brighton, UK and Tokyo, Japan and Albignac, France. They are also frequently requested for private engagements for companies and individuals. Their philanthropic work consists of performing for care homes, hospitals, various charities and schools. Since 2014, the Passepartout Piano Duo is associated with Live Music Now.