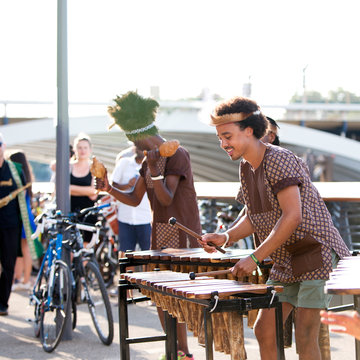 Otto & The Mutapa Calling is a lively London based marimba band playing energetic, joyful music from Botswana, South Africa and Zimbabwe, including folk songs, original songs and popular southern African covers. The band's set-up includes soprano, tenor and baritone marimbas, mbira, hosho, drumming and singing, with both traditional and contemporary dances. The marimba band’s sound is full of energy and pulsating rhythms - and our music shares the rich cultures, histories and stories of the people of southern Africa. The band was officially formed in 2017 by band leader, Otto Gumaelius, who started playing African music on the marimba in the late 1990s in Botswana, and the band is comprised of musicians from Botswana, Zimbabwe and the UK. Some highlights from our 2018 summer performances include Wandsworth Arts Fringe, All Points East Festival, Heritage Zimbabwe Festival, Make Music UK Day, From The Forest Festival, Art Night London, One Love Festival and Leytonstone Street Festival. Otto & The Mutapa Calling is a unique and colourful experience and is the only active professional marimba band of its kind in all of Europe. ABOUT BAND LEADER OTTO GUMAELIUS Otto Gumaelius is a London based, Botswana raised, percussionist specialising in the Kwanongoma marimba of southern Africa. He writes and performs, and teaches music from Zimbabwe, South Africa and Botswana through his company, African Marimba Music Ltd. He is also a published author with a 1st Class Master of Arts Honours Degree in International Management. He speaks four languages, and has lived, studied and worked in five countries around the world. MUSICAL BACKGROUND Born and bred in Botswana, Otto started playing the marimba at the age of 11. He continued to play marimba music throughout his secondary school years, studying under marimba pioneer and composer, Alport Mhlanga. He played in the school band until he left Botswana in 2003, having performed widely in Botswana and South Africa. After relocating to Sweden, Otto joined Zimba Marimba Band, a high energy marimba band specialising in the music, dance and traditions of the Shona people of Zimbabwe. With Zimba, through the great initiative of Peta Axelsson, Otto got to delve deeply into the music of Zimbabwe; learning from and performing with an array of internationally acclaimed musicians; working on marimba, mbira, dance and drumming, with performances in and around Scandinavia, in Botswana, Mozambique, South Africa and Zimbabwe, and the United States of America. Highlights include performances for the King and Queen of Sweden in 2003, ZimFest in the USA in 2004, and being specially invited to perform at HIFA - Harare International Festival of the Arts - in 2007. Otto moved to London in 2010 after graduating, and played with acts and artists including Chedu, Flame Lily Arts, Afriquoi and Tsungai Tsikirai. In 2016, Otto quit his job as a project manager to pursue a full time career in music. He formed African Marimba Music Ltd which specialises in marimba music workshops and performances, with a focus on the traditions of southern Africa. He also formed a band for corporate and private bookings called Duduetsa. With almost 20 years of experience, and a need for his own voice, Otto decided to put together a band to perform a collection of his own original material as well as arrangements of some of the folk songs he grew up listening to and playing. To date, Otto has featured on recordings by Thornhill Marimba Band, Maru-a-Pula Marimba Band, Zimba Marimba Band, Afriquoi and Flame Lily Arts. He provided music for the 2017 documentary, Apes of Brecon Beacon. Otto and the band released their debut album, Mvura Ichanaya, in the summer of 2018. TEACHING Otto began teaching during his teenage years in Sweden. He taught weekly marimba lessons to young people aged 8 – 18 at Staffanstorp's Community Music School, and was regularly invited to teach both youth and adult groups in Helsingborg and Astorp. Otto led workshops in Iceland with Peta Axelsson in the winter of 2004; he has taught at Zimba Marimba International Marimba Camp on several occasions; and has worked with marimba students at ACS International School in Cobham. Through his company, African Marimba Music Ltd, Otto has run marimba workshops at various events and festivals in the UK, including Midnight Run and ZimFest Live. Otto runs weekly African marimba music classes in Bethnal Green, London.

We saw you play at the Southbank the other day - you were all amazing! My boyfriend and I loved you, such great fun and absolutely the highlight of our day!

You guys were amazing! Thank you for making our day so memorable!

Brilliant performance! These artists are creating something unique that deserves a wider audience.

Otto and his team played a wonderful show for us at the architectural association for the annual summer party! He’s great with communication and always willing to help in any way he can. It’s great working with someone who takes his profession seriously and I would highly recommend him

With high energy and an authentic sound, they never disappoint and always have the audience on their feet

You really added such a great celebratory atmosphere to our wedding and the guests absolutely loved it! Fantastic music! You are all so talented! Thank you for helping make our day so special!