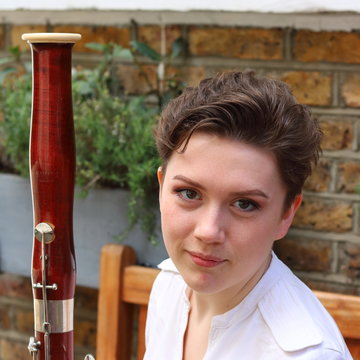 Check availability and get a free quote now - no commitment to book
From£180
Watch & Listen
About Olivia
Home page
Olivia Palmer-Baker
Like Olivia?
Watch & Listen
Watch
Listen
1 of 1 video

Bassoonist Olivia Palmer-Baker has performed nationally and internationally as a soloist, chamber musician and orchestral musician; at age 22, she has already forged an identity as a versatile musician, making significant performances in contemporary music, historically informed music, and classical music. Notable solo performances include a recital in the Festival Internacional de Santander as part of the Encuentro de Música y Academia de Santander (2019), winning the Royal Academy of Music Florence Woodbridge Bassoon Prize (2018) and various performances as a 2017-18 Featured Young Artist of the Hard Rain Soloist Ensemble. As a soloist, Olivia actively seeks collaboration with composers and creators; on top of ongoing collaborations, post-coronavirus she will premiere pieces being written for her by composers Arnau Brichs and Matthew Olyver, and she will continue her explorations of performing improvisation with live electronics that began with her first improvisation set at the launch of composer Alex Hill’s CD ‘OutsideIn’ (2020). Her recent ‘lockdown’ performance of ‘Blaues Fragment’ by Pierluigi Billone has taken her to the ongoing final of the Divertimento Ensemble’s competition #iorestoacasa (2020), and her sounds have been captured in another ‘lockdown’ creation composed on MaxMSP by composer José del Avellanal Carreño (2020) Olivia also enjoys performing as an orchestral musician: highlights include residencies in the Aldeburgh Festival and Royaumont with Ulysses Ensemble (2019), performing alongside Ensemble InterContemporain in ManiFeste (2019), performing with the Academy of Ancient Music at Kings College Chapel Cambridge to record a new album and for a documentary aired recently on ARTE (2019), performing a full Beethoven piano concerto cycle in the NCPA Mumbai with Barry Douglas and Camerata Ireland (2018), and touring with the Lucerne Festival Academy Orchestra to the Berlin Philharmonie, Paris Philharmonie and Elbphilharmonie (2018) – and she will return to the Lucerne Festival in 2021 as the newly appointed Lucerne Festival Academy Alumni bassoonist. As a chamber musician, Olivia recently won the Nancy Nuttall Early Music Chamber Prize at the Royal Academy of Music (2020) and reached the final of Non-Classical Battle of the Bands with experimental group 4|12 Collective (2019). She is a founding member of PRISM Ensemble, an experimental wind quintet focused on collaboration between the arts, which made their debut concert in January 2020 and in ‘lockdown’ has recently been curating online concert series, the most recent of which involved improvisation duets using Instagram Live. Olivia currently studies with Amy Harman, John Orford, Fraser Gordon and Andy Watts as a fourth-year undergraduate at the Royal Academy of Music. She is grateful to be supported by the Winifred Agnes Disney Award, the Wolfson Foundation, and is a Talent Unlimited Artist.