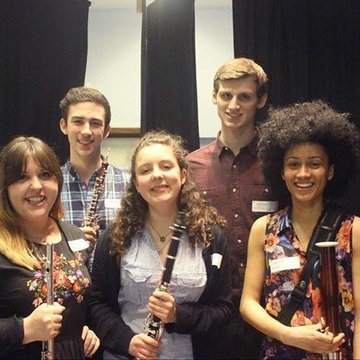 North Winds quintet formed in September 2014 and quickly discovered a passion for performing in an outreach context, especially to children who had little exposure to classical music, This led to an exploration of music with narration, a unique genre for woodwind chamber music groups. North Winds' performance of Peter and the Wolf and Butler's Dirty Beasts was awarded Highly Commended in RNCM cross-schools prize, and were awarded the June Emerson Prize in 2016. They have performed for RNCM and Bridegwater Hall Open Days, performed opening night at the Harpenden Music Festival, and done an outreach tour of Staffordshire fully funded by the Leverhulme Trust, taking the music from Tchaikovsky’s Nutcracker to primary schools.