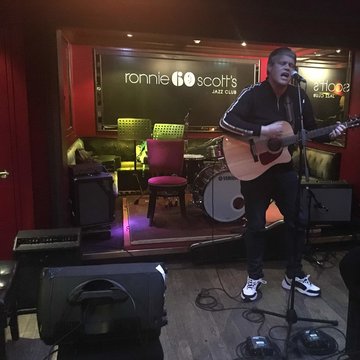 The Heart, The Soul, The Rock N' Roll
3 of 3 photos
Singer
Verified profile

Nick Higton is a Singer/Songwriter from Carshalton in South West London. He has recorded two solo albums of original material at Abbey Road Studios, "Fear Without Progression" (2015) and "Next Modern Odyssey" (2017) He has performed at prominent venues such as Cafe de Paris London, Ronnie Scott's Jazz Club, London's Hard Rock Cafe, The Half Moon Putney, Eastbourne Bandstand, The Epsom Playhouse, The Water Rats, Pall Mall 67 and The Rock Garden. Multi platinum artist, Ricky Ross (Deacon Blue) awarded Nick's song "Boomerang" as The Classic Pop Magazine 'Single of The Month' in The October/November 2016 issue. Nick has also been featured three times as The BBC Radio Introducing Artist of The South on both BBC Surrey and Sussex. His musical influences are the The Beatles, Buddy Holly, Bruce Springsteen, Guns N Roses, Nirvana, Oasis and Paul Weller.

These things happen, as long as I have realistic notice please.

Yes, can do that for you.

Of course you can.

Yes that's all taken care off, I just need somewhere to plug in.

Depends on what you are wanting. We can discuss.

Good atmosphere created wherever I play. Lots of compliments on range of voice and guitar playing.

Beatles, Buddy Holly, Oasis, Paul Weller, Guns N Roses, Nirvana, Bruce Springsteen have been my main influences. I have over a 1000 CD's and appreciate so many varied artists.

In terms of Audience numbers, 350 plus last week performing at Eastbourne Bandstand. 150 plus at The Hard Rock Cafe in London in my debut their back in 2017.

Verified
Agata A, 1 year ago

Long standing relationship with Nick, our audience enjoy his music every time. Nick always has his followers with him and acquires some new ones at every gig. Nick is a huge supporter of our charity events and goes above & beyond with his commitment.

Nick has performed at The Half Moon Putney since 2003, he was our warm up man for last year's World Cup events and has supported some name artists at the venue. Good with an audience, easy to deal with.

Nick has completed over 30 bookings for me since January 2017. Reliable and audiences like him.