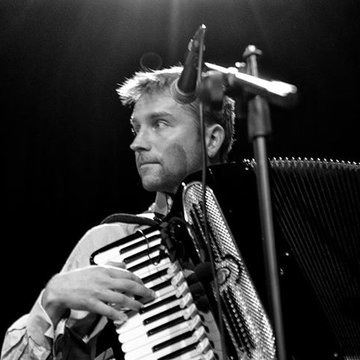 Mirek Salmon is an experienced accordionist, pianist and bandoneonist. His busy freelance career has seen him perform onstage at WOMAD, London and Cheltenham jazz festivals as well as live performances on BBC Radio 4 and Radio 3. He was a featured accordionist for a Renault advertising campaign and his playing appears on many television programmes as a result of his session work. He has performed with a wide variety of artists including Welsh National Opera, Mark Padmore, Lynden David Hall and the Drifters. He's a mainstay of manouche/cabaret band Moscow Drug Club. His recent emergence on the tango scene has seen him play bandoneon at many tango clubs around the country, with his own trio Tango Calor and with the London Tango Orchestra. He was invited to perform at La Ghironda festival in Puglia and joined the acclaimed Argentinian singer Martin Alvarado for some of his UK tour. Mirek is also a member of several ensembles that specialise in the music of Astor Piazzolla putting on performances of the famous 'Four Seasons of Buenos Aires' suite with members of the Welsh National Opera.

Verified
Chris B, 1 year ago

We have had the pleasure of hosting Tango Calor at several Urban Tango Nights events in Wales since 2017, including the Welsh International Tango Festival in 2019 in which Mirek gave an excellent talk on the life of Astor Piazzolla before the band played a concert of selected Piazzolla’s works leading into a live music milonga. We have also on many occasions travelled to Bristol, Cheltenham and many other places to dance to their music and enjoy their concerts. Mirek, Daan et al. are friendly, professional and reliable and show true musicianship in their playing which really allows dancers to express themselves while dancing to Tango Calors wide ranging repertoire. We would highly recommend Tango Calor and any event that they are playing at as there will be the highest quality live tango music.

Verified
Eduardo B, 1 year ago

A great punching combo that combines tradition with nuevo flavours. A pleasure of exciting music to dance and to listen to. One of the best tango trios you will hear in the U.K. without a doubt.

As professional teachers and hosts, if you want dancers to be out of their seats and enjoying great music, Tango Calor really does that. They are a dream to work with for us, lovely people and they really understand the importance of good music for Tango dancing.

Mirek delivered a cracking performance. If you are looking for a good bandoneon bloke you’ve come to the right place!

Verified
Chris B, 2 years ago

Mirek was fantastic at our event in Swansea. Not only did he give an amazing musical performance but he also delivered a lecture on the development of Tango music, showing great incite and knowledge of tango music and other music forms too such as jazz and African rhythms. He was professional, friendly and very accommodating to all our questions and requests.