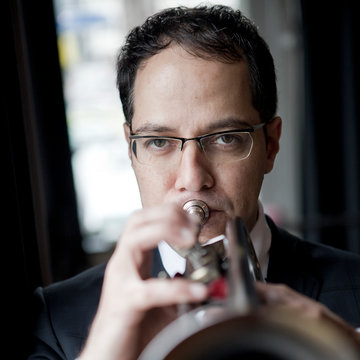 Michael Simon is a world-class trumpet player, improviser, composer/arranger, bandleader, and educator based in Rotterdam, The Netherlands.
3 of 5 photos
Trumpeter
Rotterdam

Michael’s musical background goes back to Punta Cardón (his native town), in Venezuela in the 80s when he was only ten years old already jamming with his brothers. His musical studies cover a wide spectrum, first in Cuba where he went to the Ignacio Cervantes music school to study trumpet ... then the Rotterdam conservatory of music in Holland where he obtained his arranging and composition degree in 2002. For the past fifteen years Michael travels all the world's festivals and stages as a soloist and as side man for Fra Fra Sound, Conexion Latina, Gerardo Rosales and Lucas van Merwijk & The Cubop City Big Band, as well as with his own formations: Michael Simon & Roots United, a Latin jazz septet with which he release a critically acclaimed CD production entitled “Revelación” (2004 Pramisi Records/BMCD 442), and MS-5, a group of well boiled world/jazz musicians from The Netherlands. In 2004 he released his second album "New York Encounter" (Fresh Sound Records), recorded in the big apple with some the city's most respected Latin jazz musicians, as well as with his renown brothers Edward and Marlon Simon. And in 2015 "Destiny's Will", his first live album in collaboration with outstanding Malaysian musicians, and Chinese jazz singer Jasmine Chen, was released by Malaysian label No Black Tie. Michael’s intensive career as a prolific composer and arranger includes a wide spectrum of genres and formations. He received a composition assignment grant on 4 occasions from the Dutch “Fund for Creative Tone Arts”, and provided works for Marlon Simon & The Nagual Spirits, Fra Fra Sound, Fra Fra Big Band, Rotterdam Symphonic Jazz Orchestra, Deborah J. Carter Big Band, Rotterdams Conservatory Big Band and wrote all music for the music/theater play “Virus”.

For pleasure of all lovers of good music, the witty Michael Simon continues firing his creations through his vibrant trumpet in various rhythms of Jazz. His latest CD, "Destiny Will- Live At No Black Tie, Kuala Lampur, Malaysia", confirms the growth and versatility of this remarkable musician. By now Mr. Simon is one of the best trumpet players the world can enjoy

The music of Michael Simon's 'Destiny's Will' makes me want to get up and dance. There's joy and pleasure expressed in a clean sound that has hints of various strains.

Michael Simon is an extremely talented composer and musician. His horn-playing is marked with the blazing staccato accents that punctuate his playing as they emerge like fireballs from the bell of his horn.