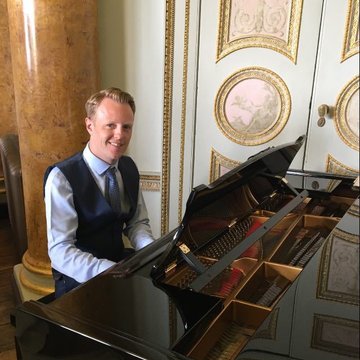 Professional Wedding Pianist based in Cardiff, UK - Can play in all styles- pop, rock, classical and film music.
3 of 4 photos
Pianist
Cardiff

After successfully completing Grade 8 piano and A-levels including music, Matthew trained for a Bachelors of Music degree at Cardiff University where he specialised in composition and music theory. He was awarded a 2:1 (hons) and the David Evans Memorial Prize in 2009. In December 2010, Matthew was awarded a Post Graduate Diploma in Music from the Open University in Wales. Since then he has gone on to establish one of the most successful piano tuition practices in Cardiff. Matthew is also an approved tutor at Gwent Music Support Service and teaches piano and keyboards in a variety of secondary and primary schools. Between 2010 and 2012, Matthew was the musical director of the choir at Media Academy Cardiff. He accompanied and directed the choir for a youth concert in the presence of Princess Anne at Llandaff Cathedral, and also for a children in need concert at St. David’s hall.Although Matthew has been classically trained, in many ways he considers his musical interests to be very broad taking interests in jazz, popular music and musical theatre.

Standard Prices
All prices include:3 unique song choices for your event/wedding

Matthew played piano as part of the christmas charity function at cornerstone in Cardiff. He is clearly a gifted piano player who can play with confidence and style. I would recommend him for any wedding or booking.

Matthew was a great addition to my parent anniversary last year. He played a great selection of music as guests entered the function room. He can play in a lot of different styles and we found him very professional on the day, and during the booking process. Thank you!