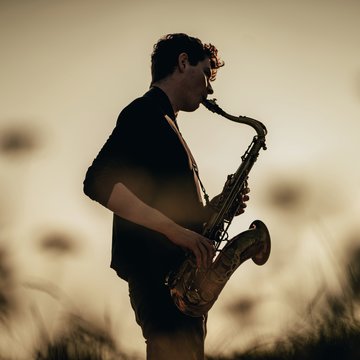 Saxophonist based in Glasgow.
Saxophonist
Glasgow

Marked as one to watch by Jazzwise Magazine, 21 year old saxophonist/composer Matt Carmichael is one of the UK’s most exciting young musicians who’s own music shows an originality and accessibility that touches the soul in a genuinely honest way, blending folk and jazz influences organically into one personal style. ‘Has his own sound and storytelling together…. very believable, lyrical and emotive… you can really feel the Scottish landscape in his playing and compositions’. BBC FOUR Born in the highlands of Scotland, Matt began playing Saxophone aged 11 through the East Dunbartonshire Schools Music Service and went on to be mentored by Allon Beauvoisin and Tommy Smith amongst others. Now based in Glasgow, Matt studies at the Royal Conservatoire of Scotland and is a recipient of the Peter Whittingham Development Award, The Fog Arts Prize for Improvisation and the Danny Kyle Award at Celtic Connections. Under his own name Matt has performed at the likes of Celtic Connections, Edinburgh Jazz Festival, Ronnie Scott’s and has had airplay on BBC Radio Scotland, Jazz FM and BBC Radio 3. Matt’s quartet features the award winning Fergus McCreadie (piano), Ali Watson (bass), Tom Potter (drums), they are due to release their debut album ‘Where Will The River Flow’ at the start of 2021 thanks to the Peter Whittingham Award. Some bands/musicians Matt has collaborated with include the Mark Hendry Orchestra, corto.alto, Luca Manning, Jonny Mansfield, World Jazz Orchestra, Fat-Suit, The Joshua Elcock Big Band, Tom McGuire and the Brassholes, Jesse Dockx… Other performing highlights include gigs in Belgium, Croatia, Serbia and at Newport Jazz Festival USA, BBC Proms and Love Supreme Jazz Festival.

Matthew was very professional. Turned up on time and was really excellent. The staff and customers all commented on how much they enjoyed his music. Thanks very much.

The 18 year old saxophonist is a young musician of exceptional promise. Intelligent, searching playing with a beautiful sound, and a penchant for melody as well as improvisation.

Fast becoming one of the leading lights in Scottish Jazz