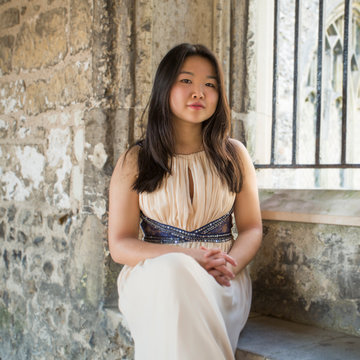 Described as 'a pianist destined to achieve great things', Maria luc is a british pianist of japanese and vietnamese heritage based in Manchester with local roots in Chichester, west sussex. she is a bmus (hons) and mmus graduate of the royal northern college of music in manchester. her studies were supported by margaret allen piano award, help musicians postgraduate award, headley trust bursary, dorothy stone award and the countess of munster musical trust. since winning the international piano competition norah sande award in 2017, she has performed extensively throughout the u.k and was offered the polonsky foundation fellowship in 2020 to attend the aspen summer music festival in Colorado, u.s.a in 2022 under the tutelage of yoheveda kaplinsky and Fabio bidini. maria won the rncm concerto competition and chopin competition in 2020 and is due to play with the rncm symphony orchestra and the nottingham philharmonic (rachmaninov piano concerto no.2) in 2022. she has frequently been a concerto soloist with many orchestras including the athenean ensemble (beethoven 5), chichester symphony orchestra (beethoven 5), helix ensemble (mozart k.466, finzi ecologue). maria has played frequently at the wigmore hall and many other delightful venues including the Wales millennium centre. as well as performing many solo recitals, she is an avid chamber musician winning the barbirolli prize for cello and piano in 2019 and paganini prize for violin and piano in 2016. she frequently plays piano duet and two piano works with wyn chan. as a duo they have played with orchestra (rncm sinfonietta) and have been invited to play at the south downs summer music festival, liverpool lightnight festival, festival of chichester and the piano and chamber music festivals at the rncm. maria is receiving lessons from GRAHAM Scott and Kathy Stott. she previously studied with ashley wass, helen krizos, Ron abramski (rncm), Ian fountain (ROYAL ACADEMY OF MUSIC) and masayuki tayama (Chetham's school of music). She first studied with Nina levtov (regis school of music) and Mark fielding (Junior Guildhall school of music and drama). maria has been given the opportunity to have lessons and masterclasses with jean-efflam bavouzet, pascal rogé, sir andrás schiff, jerome lowenthal, stephen hough, steven osborne, peter donohoe, kathryn stott, michel béroff and phillipe cassard amongst many others. maria became interested in learning the piano as she was surrounded by pianolas which her father (Anva Luc) worked on as a piano technician. her father came to the u.k. as a refugee fleeing the vietnam war after he was tragically blinded by a bomb and subsequently trained as a piano tuner at the royal national college for the blind. he met her mother (Yuriko nagashima) in Chichester who currently teaches japanese and piano. maria has two musical siblings, imy (pianist) and kenji (cellist) whom she plays and organises concerts with often plays with. she has an interest in composing and arranging, having composed her own cadenzas, duets, quartets and wind band music. Her works have featured in the festival of chichester and the rncm chamber music festival. ​ outside of performance, maria is an enthusiastic tutor in piano and theory. She is also vegan as a means to drastically reduce environmental impact, health problems and harm to animals. she loves learning new things, enjoys cooking vegan cuisine, cycling and a good conversation

Her humorous touch to the second movement brought smiles of enjoyment to several faces in the audience.