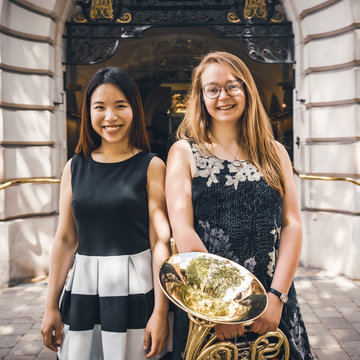 Hannah Chow Hong-Kong born pianist, Hannah Chow is based in London, where she is collaborating with singers, instrumentalists and composers. She regularly performs in duos particularly with singers and with horn. She engages with a wide range of repertoires, with particular interest in music written by female composers and contemporary music. Recent repertoire highlights have included Sicilienne et Allegro by Yvonne Desportes, Esquisse Romantique by Hedwige Chrétien and Tre Poemi by Volker David Kirchner. ​ Hannah was awarded The Gilbert's Prize for Piano Performance at her first conservatoire, as she 'demonstrated an outstanding ability in communicating to an audience through performance'. Her innate musicality and her warm personality have attracted a great number of aspiring students and endeavouring collaborators to work with her in both her teacher and collaborative performer roles. Her motto is to use music as a tool to influence lives and to nurture motivators. Her interests have evolved to include not only the classical concert stage, but also recording, in which she now has experience on both sides of the microphone, session playing, and online teaching. Hannah studied piano accompaniment at the Royal Academy of Music with Ian Brown and Nicola Eimer. Her upcoming events include song and chamber recitals in and around London. Lynn Henderson Originally from Cornwall, Lynn Henderson is a horn player with a great interest in orchestral playing, chamber music and outreach work. Lynn has performed with the BBC National Orchestra of Wales, the Divertimento Ensemble, the Britten-Pears Young Artists Orchestra, the St Endellion Festival Orchestra and the Chipping Campden Festival Orchestra. Having recently completed a Masters in Performance at the Royal Academy of Music, Lynn is currently based in London, with international recording projects now based online, including the PRISM Ensemble’s Reacts series, the ALEAS series with Italian composer Marco Caricola and live online improvisation with the Thinking Minds Project. Lynn studied at the Royal Welsh College of Music and Drama for her BMus, graduating with a first and the Principal’s Award in 2019. Her brass quintet, which formed at the Welsh College, Blackweir Brass, are artists with Live Music Now and were Making Music selected artists for 2019/20. Summer 2021 sees her playing with the Ulysses Ensemble in Paris as well as planned performances with PRISM Ensemble in both London and Italy. Outside of music, Lynn enjoys early-morning surfing, baking and pub quizzes. She is also currently a member of the Musicians’ Union’s Equality, Diversity and Inclusion committee.

I wanted to write and thank you personally for your sensitive and talented performance, especially of the Eve Baglarian which was totally unknown to me.

Congratulations on a brilliant concert. I watched it last night and revisited some highlights this morning. It is a tribute to Cornish musical talent. All of the very varied performances were strong, some outstanding (notably Lynn Henderson). Beautifully presented too.