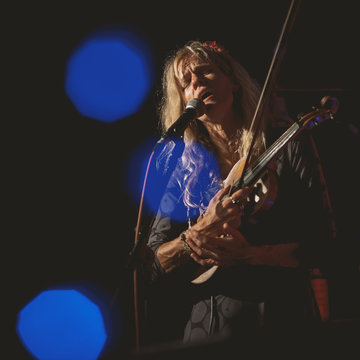 Basil started his musical journey in Lvov, Ukraine aged 10. Later, in London, he played accordion for Russian dance groups and then formed a Troika in Devon to promote East European music. As a result of an award from the Jewish Music Institute, he set up workshops in klezmer music where he met up with Lisa in 2001. They decided to form LVOV AFFAIR to perform the music they both love - klezmer, gypsy and the best of East European folk.

This is a sample list from our live CD
Makedonsko Devojce + Geamparale. A couple of tunes in 7/8, the first means Macedonian Girl, the second is from Romania.
Csak Egy Kislany. Hungarian song - You’re the only one in the world for me.
Bukhovinian Jig + Arcanul. A couple of 6/8 tunes from Romania
Belf Bulgars. From recordings of klezmer music by Belf’s Romanian Orchestra - the earliest known from East Europe
Ajde Jano. A Serbian song. Come on, Jano, let’s sell the horse and dance.
Honga & Freilachs. A couple of klezmer tunes that always seem to hang out together.
Shostakovitch Waltz No2. Used in the Kubrik film ‘Eyes Wide Shut’
Erev Shel Shoshanim. An Israeli song - Evening of Roses, lets go out in the gardens, and breathe in the scent ‘til dawn
Lemberg Bulgar + Varshava Freilachs. A pair of klezmer tunes named after Lemberg (= Lvov) and Varshava (= Warsaw)
Amari Szi Amari. A Hungarian Gypsy song, sung in a Romany dialect.
Der Gasn Nigun + Heyser Bulgar. A pair of klezmer tunes as recorded by Harry Kandel and Naftule Brandwein USA 1923
Romanian Rhapsody. From the playing of Alicia Svigals
Oi Poslala Meni Mati. A Ukrainian song extolling the benefits of being attractive at harvest time.
Au Plecat Olteni la Coasa. A Romanian tune - The Oltenians went to mow, went to mow a meadow
Bei Mir Bist du Schon. A Yiddish song written for a New York play, once described as being “too Jewish”
There are a lot more of course
Customer questions

The quality of music and sound with variety and authenticity

We can play as a duo with accordion + fiddle/vocals which is still a full sound as the accordion left side is miked up separately from the right which gives the effect of a bass player in addition to the accordion. And with a guitarist it's like a four-piece band.

No, but you can put something of your own through our PA by prior arrangement

If using PA system, usually less than an hour, if acoustic, just need a few minutes

We prefer not too as the accordion is not so light, if essential we'd bring a different, lighter accordion

Yes, although we have quite a lot more than listed on this site

Yes PA is included, if playing completely acoustic we'd normally take that into account when pricing so it may be £50 or so less

All prices include:PA system if needed,

Chagford I, 2 years ago

Every few weeks in the autumn Wednesday Night in the Chagford Inn becomes a whole lot more fun thanks to Lisa and her friends playing their special style of Klezmer and gypsy music. Lisa on violin with Basil the accordionist played some great music which made you want to leap up and dance balanced by some haunting slower pieces. The guitarist provided excellent support, as did the ’basso continuo’ from the accordionist's left hand using the whole instrument to boost the sound. Sparkling and precise music - a real joy!