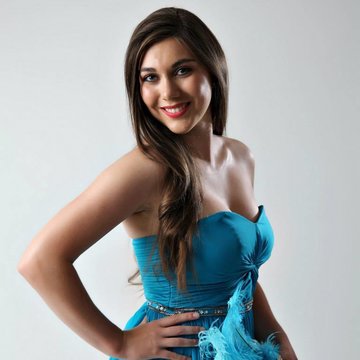 Check availability and get a free quote now - no commitment to book
From£180
About Louisa
Reviews
Home page
Louisa Alice-Rose
Like Louisa?
Watch & Listen

Michael I, 5 years ago

An excellent voice in fine condition and a great American accent together with high quality acting.

Really good voice and great sense of drama. You present a super character on stage...

I first heard Louisa sing at the Chesham Arts Festival in 2011, and was very impressed with her performance. Following this, I was extremely pleased when she agreed to represent Amersham Rotary Club in the Rotary Young Musician competition in 2011 and 2012 winning the vocal competition in the District and Regional events, which led to the UK finals in both years. This was a substantial achievement as over 6,000 young musicians, instrumentalists and vocalists entered the various local, District and Regional stages with only 8 young singers, and 8 instrumentalists being invited to compete in the UK Finals. On 13th April 2012 she was awarded second place in the Rotary in Great Britain and Ireland (RIBI) Final in Bournemouth, and the same evening entertained Rotarians from all over the country with pieces by Faure, Mozart and Bach in the Variety Show at the Bournemouth International Centre as part of the RIBI Annual Conference. The standard of singing and playing in these competitions is at an extremely high level and Rotary is proud to be able to showcase our very talented young performers. Louisa has also taken part in our Variety Show for the Elderly, where she showed off her lovely voice in songs by Rogers and Hammerstein to our appreciative audience of 140 retired ladies and gentlemen. We at Amersham Rotary Club wish her well in her studies and future career.