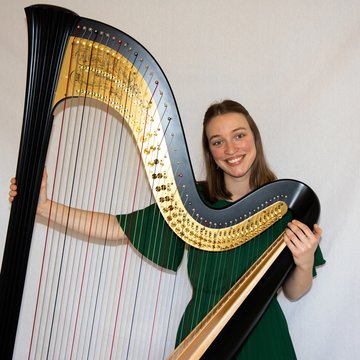 Lise Vandersmissen was born in 1996 in Belgium. She studied with Lieve Robbroeckx for her Bachelor’s Degree in the LUCA School of Arts, Belgium, and completed her Master’s Degree at the Guildhall School of Music & Drama with Imogen Barford, London. She is currently part of the Fellowship Programme at the Guildhall. Lise participated successfully in national and international competitions. Amongst others, she won First Prizes at The 5th International Harp Competition in Slovenia, The Vlamo Concours and The Belfius Competition in Belgium and The North International Music Competition 2018. She won the Second Prize in the Fifth International Harp Competition in Hungary, and was awarded the Third Prize at the North London Harp Competition 2019. She won the Guildhall Harp Prize 2019. She was a Prizewinner at The 9th Michał Spisak International Music Competition in Poland, and was selected to perform at the Focus On Youth Platform on the World Harp Congress in Hong Kong in 2017. She won the Special Prize of the Hungarian Harp Duo at the 4th International Harp Competition in Hungary and the Second Prize at the Prinses Christina Concours in the Netherlands. She won a place at the London Sinfonietta Academy and the Académie Camac in France with Isabelle Perrin. She was selected to be a Concordia Foundation Artist. In June 2019, Lise gave the world premiere of Mark-Anthony Turnage’s new piece for solo harp: Four Meditations. Lise will be performing her transcription for solo harp of Ravel’s Le Tombeau de Couperin at the World Harp Congress in Wales this summer. Lise has performed as a soloist with The Symphony of Zabrze Philharmonic directed by Sławomir Chrzanowski in Poland, Youth Orchestra Amikejo under Mark Prils in The Netherlands and the Symphony Orchestra of Luca School of Arts directed by Ivan Meylemans in Belgium. She has played in the final of the Croydon Concerto Competition with the Croydon Symphony Orchestra in London.

Imogen B, 4 years ago

Lise is an extremely accomplished harpist, with a fine technique, and a deep feeling for the music she plays.

Lise has a fully developed technique, she also has a strong individual musical sensibility and is quick and open to learning, reacting well to observations, ideas and criticism.