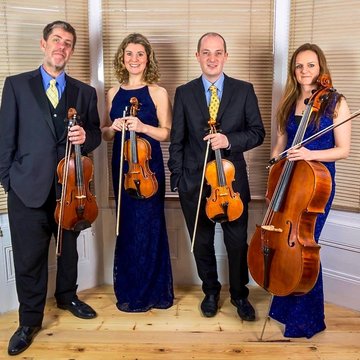 LaCordia String Quartet performs for corporate and private events, weddings and recitals in Sussex and the surrounding areas. Offering high quality performances, LaCordia plays with personality and flair to add more than just background music to any event. With our wide repertoire we can tailor music to each event, from classical and baroque through to jazz, tangos and pop. An experienced group of musicians, each player has extensive performing experience in their on right, on shows such as Later with Jools Holland, music for The One Show and BBC Radio shows and documentaries. Based in West Sussex, the group is comprised of key musicians from the area, and members have performed with Brighton Philharmonic Orchestra, with artists and conductors such as Sir Elton John, Sir Roger Norrington, Andy Crofts and Chris Watson from Paul Weller's band, to name a few. Other credits of the players include Glastonbury, Latitude, film trailers and the BAFTAs. The musicians trained at Trinity, the Royal Academy of Music, and Manchester University. The players have performed at venues from tiny local churches to The Royal Albert Hall. As a quartet, La Cordia have performed for numerous events from weddings to book launches, themed corporate events, recitals, auctions and functions. Events and weddings have included Brighton Pavilion, the i360, Brighton Town Hall, Brighton Bandstand, Stanmer Park House, Field Place, Hotel Du Vin & The Grand Hotel in Brighton, Palm Court Pavilion, Coast Cafe, St Paul's Arts Centre, Worthing Museum, Hall Place Bexley, and St Margaret’s Rottingdean. Other clients have included the RAC Club, Zeiss, BT, Mace Montessori and Selfridges. We are also available further afield.

Absolute joy listening to you rehearse at St Pauls last night with Andy crofts & Chris watson, The folk who attend the Bowie fundraiser at St Pauls 26th march are in for a real treat

The Moons: Big thank you to @lacordiastrings for performing with Andy and Chris last night at the @DavidBowieReal tribute show. Was fantastic

Cheryl Elizabeth: We really loved your performance, it was our favorite part of the evening. Beautiful!