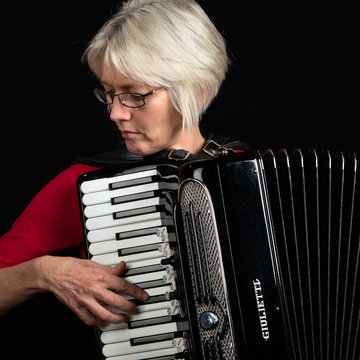 I have a wealth of experience in the music business both in performance and composing/arranging music.

KAREN STREET - Accordion and Saxophone Karen began playing the accordion at the age of seven and went on to become the British Virtuoso Champion in1981/2 and competed in the World Championship in Hamburg and Folkstone the following years. Now a freelance musician she is in constant demand for a broad range of projects encompassing classical, contemporary and jazz. In the jazz world she has been a regular member of Mike Westbrook's projects as well as playing with Tim Garland, Christine Tobin, Phil Robson, Steve Arguelles and Tina May. SHe played with the guitarist Martin Taylor last year in Guy Barker’s arrangement of music from Spirit of Django. She has produced three CDs of her own featuring Stan Sulzman, Fred T Baker, Mike Outram and Sara Colman. Other performing credits include Grace Jones, Ute Lemper, Royal Shakespeare Company, BCMG, The Nash Ensemble, Ice Breaker, Opera North, BBC Philharmonic, the RPO, the LSO, Willard White, Tango Siempre, Royal Opera House and many West End productions. As a saxophone player she was a member of the well known and highly successful all-girl saxophone quartet 'The Fairer Sax' who appeared on television and radio and at festivals all over the world. As a composer Karen specializes in writing music for the saxophone, from solos to large ensembles, many of which are published by Boosey & Hawkes, June Emerson and Saxtet Publications. Her pieces now appear in virtually every music exam syllabus in the UK. Her composition for solo accordion "In the Ballroom with the Rope" took first prize at the London Accordion Festival, Composition Competition, 2001. She now writes and arranges for many different ensembles.

Standard Prices
All prices include:PA. Discussions between us about the gig. Any repertoire needed

Karen and Andrew were excellent musicians and all of our guests enjoyed their entertaining performance. They provided ideal music for our large lunch party and were really appreciated by everyone.

“Karen Street is a world class accordionist, incredibly versatile covering a huge range of musical styles from classical to jazz. She can entertain solo or with her equally talented husband - sax player Andy Tweed. I have recently booked them to be star guests feature at my monthly show. They proved to be hugely popular and are a delight to work with. I shall definitely be asking them back! “

Verified
Marianne A, 1 year ago

Karen Street and Andy Tweed are individually great musicians. Together they produce innovative music and variations on classical /jazz / popular themes. Their talents and joy of producing sensational music comes through in all their performances. Their concert on May 12th was brilliant!

"Thanks so much for playing so exquisitely last night. Pure magic all the way through – classy repertoire and inspiring execution.  I could have listened all night."

Verified
John B, 6 years ago

"I really enjoyed the evening and thought Karen Street’s playing was beautiful. The accordion has never been one of my favourite instruments but having heard the way Karen plays it my point of view has been seriously revised. "

The combination of Karen Street's lyrical compositions with her responsive and unique accordion playing is classy, spritely stuff. Fiona Ord-Shrimpton June 12, 2015 all about jazz

Musicians who have given the accordion a genuine voice are rare, but Karen Street is undoubtedly among them.