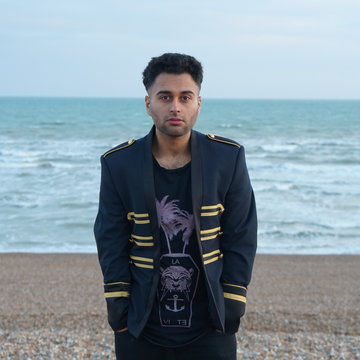 Check availability and get a free quote now - no commitment to book
About Karan
Song list
Reviews
Home page
Karan Master
Like Karan?

Karan Master is a UK Artist/Vocalist/Guitarist/Songwriter & Composer. Performing under the name of 'The fortySix', Karan performs a genre called 'Neo Emo Soul' all over the UK and internationally. He also works as a session songwriter, musician, in artist development and performs at functions. Playing guitar and gigging from the age of 13, Karan began his music career in 2015. Based in Southampton UK, his first job was as the house guitarist of Plug & Play’s weekly jam night. In 2016 Karan joined the team of Monday Night Blues, one of the first open mic's in the city running for over 8 years. Broadening his role, Karan organised and lead the house band as a vocalist, guitarist and bass player. Working with the venue team (Orange Rooms), he become involved with online promotion. He continues to run open mics, most recently The Flying Dutchman Open Mic & Jam Night. He then began freelancing as a studio guitarist recording a variety of genres and artists including Elléana (R&B), Lily White (Pop/Alternative), Daniel Baker (World Music). Karan has a wide experience of performance playing corporate events such as Old Mutual Wealth’s Annual Oscars at Southampton Guild Hall, to function gigs ranging from genres…Pop, Rock, Neo Soul, Funk & R&B. Between 2015 - 2017 Karan released music under the name 'The Emergency Please' and perform the repertoire at gigs and festivals in the UK and internationally. He also performed as function vocalist, guitarist and bass player for solo and band events. In 2018 under management from Daniel Baker, Karan rebranded his sound and image performing under the name of ‘The fortySix’. By 2019, ‘The fortySix’ performed a string of UK shows and at festivals supporting a variety of artists from unsigned to likes of Toploader, Kurt Travis & Dodgy. Under management from The Oblique Life, ‘The fortySix’ announced that 2019 would feature new music throughout the year. Delivering two EPs so far, the band recently announced they are releasing 3 singles each month from May to June. Their latest single 'Trouble' was filmed and performed in Amsterdam and has received strong reception on Spotify. Additionally working as a music consultant for Eleutherius Music, Karan works developing artists as songwriters, musicians and for delivering audio/video for SYNC.

The Oblique Life has been working with Karan for over a year now and would recommend him to anyone. As a frontman, Karan owns the stage and delivers electrifying performances with style and panache. As a singer and a musician, we are confident in his ability to deliver - he’s performed for us at gigs but also helped us out with other musical projects over the last year, and has been a credit to each one. In terms of repertoire, Karan has a great variety of originals and covers, and is always willing to learn new material if required. We’ve hired him for our own gigs and corporate gigs with different requirements, and he’s always delivered. Karan is a pleasure to work with and we’re excited to continue working with him throughout the future.

1. How was my performance as a frontman, singer and musician?: Consistent stage presence from the get-go. Incredible energy throughout the performance whilst maintaining the consistently impressive performance that is expected with the quality of the recorded and released music from Karan & his band the fortySix. 2. Am I willing to learn songs tailored to the clients needs?: Professionalism is something I sensed from him as a performer and providing a service. From the covers that were played at the show where we met nothing is out of bounds for his talent. I can imagine learning songs for clients needs is nothing short of a simple task to perfect them to a polished product to be appreciated by those who have requested certain music. 3. How did I deliver the job I was hired for?: Extremely well and polished, nothing that would be up for a complaint or any discussion other than great sounding, authentic music. 4. What is it like to work with me?: Very fast paced, efficient and concise in every aspect to possibly expect from a musician. 5. Would you work with me again?: I could not recommend Karan in higher regard, It was a pleasure to work alongside him as a professional and great to watch as a customers perspective.

Singers in the UK
Singers in Eastleigh
Singers in Hampshire
Singers in Cowes
Singers in Winchester
Singers in Portsmouth
Company
Discover
Download
Join us on
© Encore Technologies, Ltd.
Crafted with bagels and in London