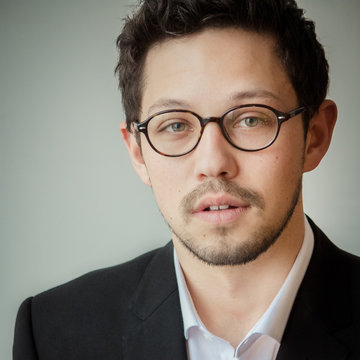 Joseph is a versatile Singer and Conductor based in the UK. Director of the Hallé Choral Academy, he also holds the posts of Music Director of the Leeds Guild of Singers, Lay Clerk at Manchester Cathedral, Conductor with the Hallé Corporate Choir scheme, FCM Chorister Tutor at Bradford Cathedral, and regularly sings with BBC Radio 4’s Daily Service Singers. He was one of the eight inaugural Fellows of the National Youth Choirs of Great Britain (NYCGB), performing as part of an elite vocal octet throughout the UK and in Malta, Shanghai and Hong Kong. Joseph is in demand as a Countertenor, and recent solo engagements have included Bach B Minor Mass, St John Passion, and the Magnificat performed at Snape Maltings, Handel Messiah, Dixit Dominus, and Israel in Egypt, Bernstein Chichester Psalms, and Arne Rule Britannia on BBC One’s The One Show. Joseph also continues to sing and work with many UK choirs and ensembles, including Siglo de Oro, Armonico Consort and Westminster Abbey Choir. He has participated in masterclasses given by James Gilchrist, Harry Christophers CBE, Neil Ferris, and Lucy Schaufer. Joseph has worked with Leeds Philharmonic Chorus, Hallé Youth Choirs, St George's Singers (Poynton), Gorton Philharmonic Orchestra, as music staff on NYCGB Courses, directed the vocal recording session for the PlayStation 4 advert, The King, and conducted in the Bridgewater Hall. He is the founder and director of Turton Consort, whose performances have included a highly acclaimed recital of Monteverdi Madrigals Book IV at St Ann’s Church, Manchester, and at the Whitworth Art Gallery for the opening of the Marcantonio Raimondi exhibition.

If there is a heaven, that's what it sounds like. The soprano voices in particular were mind blowing; pure perfection to me, breaking through the audience pre-concert mumbling like a ray of light through the stained glass windows. The final madrigals were sung from the front of the church bringing a finale so natural and perfect that felt like a boat gently pulling into shore.

I found Joe to be an encouraging and sympathetic coach, clear in what he was seeking to develop in my vocal technique.

Joe has helped me to improve my vocal technique and given me invaluable guidance. He is a natural teacher with a supportive attitude and a lovely, relaxed manner.

Conductors in the UK
Singer (Countertenor)s in the UK