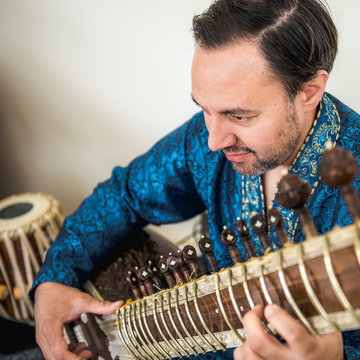 Son of the late Kolkata composer John Mayer, Jonathan began his musical training at the early age of 5 with Violin, Piano & Composition. He started his initial training under the western sitarist Clem Alford who was a disciple of Sachindra Nath Saha, Senia Gharana. Later he studied Imdadkhani Gharana technical proficiency under Ustad Wajahat Khan for a short while and finally settled in to the Senia Veen-kar Gharana under the extremely knowledgeable maestro the late Pandit Subroto Roychowdhury. Jonathan Mayer studied composition from his father who studied violin with Phillipe Sandre in Calcutta, music theory with Melhi Mehta in Bombay, Indian theory with Sanathan Mukerjee and composition from Matyas Sether. Jonathan later studied composition from Andrew Downes at the Birmingham Conservatoire where he gained a B.Mus (Hons) at the Birmingham Conservatoire studying both sitar and composition. Because of his ability to read western notation he has performed in a variety of genres and so far his career has seen him play with artists such as Dave Stewart, The Bingham String Quartet, Kathryn Tickell, Kumar Bose, Kuljit Bhamra, Erich Gruenburg, Rohan De Sarem, The London Philharmonic Orchestra, Bohuslav Martinu Philharmonic Orchestra, Kenny Wheeler, The Orlando Consort, John Wilson, Bombay Dub Orchestra, Future Sounds of London, Sarah Brightman, I Musici Fiamminghi Orchestra,and Sir Paul McCartney. Jonathan has performed all over the world including, France, Germany, Russia, United Arab Emirates, Australia, America, Bangladesh, Sri Lanka, and two very successful tours in India (including a performance at The Dover Lane Music Conference) as well as a number of performances for the BBC in the UK.

Standard Prices
All prices include:Small PA system for up to 200 guests. Quotes are for London area

“Jonathan successfully captured the playful approach to Raga Kafi from the beginning of his performance. He went on in a smooth and rhythmic manner with some sparks that proved the depth of his knowledge of the raga.”

“In the very Aaochar of Kafi, Jonathan was able to spread the mood of this Raga. His Gat in Tintaal had amazing spontaneity and beautiful rhythmic manner…”

“..In fact, be it in individual piece or in his father John Mayer or in consonance with other artists, Mayer played Sitar with deft dexterity.”

Sitars in the UK

Sitars in the UK
Sitars in Chelmsford
Sitars in Basildon
Sitars in Southend-on-Sea
Sitars in Colchester
Sitars in Rochester
Company
Discover
Download
Join us on
© Encore Technologies, Ltd.
Crafted with bagels and in London