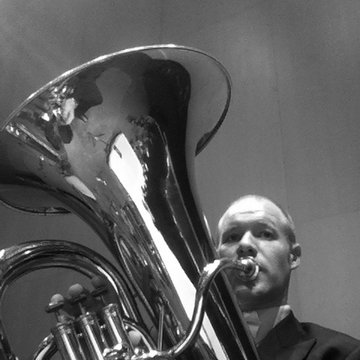 Jonathan studied music at the University of Ulster before moving to Glasgow to complete a Master of Music at the Royal Scottish Academy of Music and Drama. Upon leaving college he quickly established himself on the freelance scene, performing regularly with orchestras such as the BBCSSO, RSNO, Royal Northern Sinfonia, Scottish Chamber Orchestra, Ulster Orchestra, Royal Ballet Sinfonia, Cyprus Symphony Orchestra, RTE Concert Orchestra, RTE National Symphony Orchestra, World Brass and the Orchestra of Scottish Opera. In 2006 he was appointed to the position of Principal Tuba with the Scottish Ballet Orchestra, a position he still holds today. From 2010 to 2013 he combined this role with the position of Principal Tuba at the Orquesta Sinfonia de Tenerife in Santa Cruz, Tenerife. Jonathan is heavily involved in Music education. He has been the low brass instructor for the National Youth Orchestra of Ireland and the European Youth Brass Band. He has also delivered performance classes at the Royal Conservatoire of Scotland, Queens University and the University of Ulster. He was a founding member for the award winning brass quintet Alba Brass, with whom he has designed and presented educational workshops throughout the UK, Ireland and United Arab Emirates. Available for concerts and recordings. Home studio available for remote recording sessions.

Tubas in the UK
Tubas in St Albans
Tubas in Slough
Tubas in Windsor
Tubas in Sevenoaks
Tubas in Hertfordshire
Company
Discover
Download
Join us on
© Encore Technologies, Ltd.
Crafted with bagels and in London