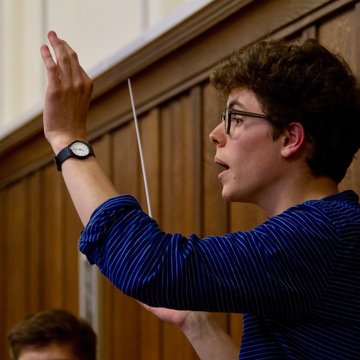 Check availability and get a free quote now - no commitment to book
From£180
Watch & Listen
About John
Reviews
Home page
John Warner
Like John?
Watch & Listen
1 of 1 video
Vaughan Williams: Fantasia on a Theme by Thomas Tallis (opening)

John Warner studied Music at St Peter’s College, Oxford, graduating with First Class Honours in 2016, and an MSt with Distinction in 2017. With a reputation for powerful, emotionally charged performances, he has been described as having ‘the clear but fluent style of a conductor well beyond his years’, his concerts characterised by ‘a gripping level of intensity’ and ‘magnificent pacing’. While at Oxford, he won the prestigious Conducting Competition, awarding him a year with the University Philharmonia. In 2014, he founded the St Peter’s Chamber Orchestra, who relaunched in 2018 as the Orchestra for the Earth, committed to using classical music to engage new audiences worldwide about climate change and the natural world. Every year they tour to Mahler’s three summer composing residences in the Alps, raising funds to support a new nature reserve in Austria. He is also Chief Conductor of the Central London Orchestra, and works regularly as guest conductor with orchestras such as the Oxford Chamber Orchestra, the Orchestra of St. John’s, the Orchestra of the Oxford Chamber Music Festival, and the Oxford Sinfonia. He has studied conducting with Toby Purser and Marin Alsop. [Do not reproduce without permission.]

The orchestra played with passion, verve, and musicality conducted by exacting and mesmerising conductor John Warner. It remained in my mind as one of the high points in the festival but also as a conductor and orchestra to follow.