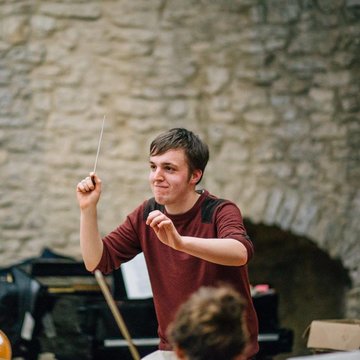 He had conducted with no sheet music for Mahler [Symphony no. 4]– an indication, perhaps, of the time and dedication that he and his ensemble had put into their work.

Verified
Jane B, 3 years ago

The Eden Valley Opera Company, directed by their inspiring, up and coming conductor, Joe Davies, gave a spirited interpretation of this one act opera. This promising young conductor expertly led his fine musicians through the many twists and turns of this tragic but entertaining Baroque drama- he held them firmly in his grasp from start to finish.

Joe was on form throughout the concert, driving the orchestra with the distinctive gusto that has set him apart from his conducting contemporaries.

Daily I, 4 years ago

Conductor Joe Davies, a 2nd year choral scholar at St Peter's College, was here - teasing out a chirpy and life-affirming Amen - and elsewhere an animated figure, supple of hand gesture and giving out energy to his singers, [...] controlling the discrete elements incisively. Something tells me he has a substantial future ahead of him in this field.

Master conductor Joe Davies navigated through the [Candide] Overture with ease, not to mention the rest of the music which truly sounded like a professional group of musicians

The players under Davies’ direction proved capable of drawing out the emotion written into both pieces.

Daily I, 4 years ago

The performance owed much of its vitality to the direction of Joe Davies. Conducting the Ripieno Players is just one accolade on Davies’s impressive list of musical achievements – if you follow the university music scene, you’ve probably heard an orchestra under his direction at the Playhouse or the Sheldonian.

The band, under the masterful direction of Joe Davies, provided the backbone of the show. From the opening overture, the musicians delivered a sound of professional quality and gave the operetta a youthful feel with their enthusiasm.