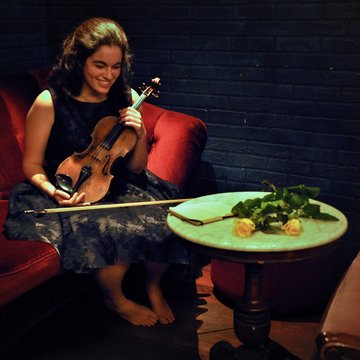 Classically trained violinist and violist and a fiddle player proficient in several styles.

Jeri Foreman is a highly respected name in Australian folk music. A fiddle player from Adelaide (South Australia), Jeri’s debut in the Australian folk scene was winning back-to-back Young Traditionalist’s Awards at the Victor Harbour Folk Festival, age 11 and 12. Jeri won Most Outstanding New or Emerging Artist/Group in the Folk Federation of SA Folk Awards in 2007 and 2008. In 2009, her performances with Adelaide band, Garida, won the inaugural Peter Daly Award for the finest performance of Celtic music at the National Folk Festival and in 2010, Jeri was awarded two grants and multiple scholarships to travel through the USA and Canada, to study with many of the world’s top fiddle players. In 2011, she was the South Australian representative in the Fiddler’s State of Origin project at the Fleurieu Folk Festival, a project celebrating traditional Australian music. In 2014, she won the Best Composition Golden Fiddle Award for her tune, “No Bigger Than an Envelope”. In 2016, she was awarded the National Bluegrass Scholarship, and remains the only female recipient. Jeri is a multifaceted fiddler, fascinated by finding similarities and differences in fiddle traditions and now resides in Scotland. Jeri holds a Bachelor of Music with Honours (majoring in violin performance) from the Elder Conservatorium. She has released two albums of compositions in the Celtic style, in 2013 and 2017. She continues to play with a variety of musicians in multiple genres.