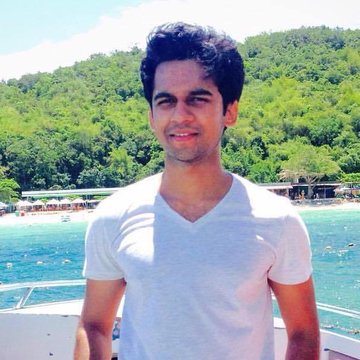 Jay Parte is an Indian concert pianist. Born in 1993 into a musical family, his father, Tushar, is a professional composer and arranger in the Bollywood (Indian film) industry and his mother, Suchita, is an Indian classical singer and music teacher. Jay is currently on a Masters in Music program at Trinity Laban Conservatoire of Music and Dance, Greenwich, London, after being awarded the ‘Great Scholarship’ in 2016. He studies under the renowned Italian concert pianist Gabrielle Baldocci and has had the chance to play in front and seek advice from many inspiring artists and seek their advice including Pascal Rogue, Rolf Hind, Peter Tuite, Martha Fingerhut, Martino Turimo and Karl Lutchmayer just to name a few. A 1st prize winner in the Con Brio 2014 Solo Piano Competition, India, Jay has performed in classical, contemporary, pop/ prog rock styles for private as well as fundraising events. He performed a full-length piano solo recital at Bow Church, London, in October 2017 and again in May 2018, the latter being a chamber recital, in collaboration with his piano trio. His music career also focuses on piano education. He was enrolled in a teaching course (‘Pedagogy for the 21st Century’) at Trinity Laban to further his pedagogical studies. He has a fun and a thorough approach to teaching that incorporates a broad range of musical styles such as classical, pop, rock, improvisation, blues and jazz in the piano lessons and designs lessons around his student’s needs, learning styles, and musical interests. Jay has accompanied students for examinations of all levels and seldom accompanies the Bow church choir on the Organ or Piano. Sofia Calenza, an Italian Soprano, and Jay together went on to the final round of the Lillian Ash French Song (voice-piano duo) Competition in London in March 2018. He accompanied the Befriender’s Choir (a group of retired senior citizens) from London, for their annual Spring Forth Concert in March 2018 which took place at Trinity Laban, Greenwich. Over the course of Spring, 2018, Jay assisted a practice club at the Dalmain Primary School along with Miriam Walkeling. This was one of Trinity Laban’s five in-school collaborative creative projects which brought together dance and music, culminating in a performance as part of Live at Trinity Laban at the Laban building. The project included working alongside a music and dance artist and a group of students from the school, ages 10-12, over the course of 9/10 sessions to create a collaborative music & dance performance. In February 2018, Jay was an integral part of the Liquid Crystal (Tate Exchange) team where he and two other musicians were in charge of the creating music. This was an intergenerational music and dance collaboration at Trinity Laban and Tate Exchange. A human kinetic sculpture was created as an installation, consisting of a shared physical and aural palette that evolved over the course of a week’s experimentation, leading to a final public sharing and workshop at Tate Modern. Jay’s upcoming performances include three full-length solo piano recitals to be given over the course of Summer, 2018, at Christ Church (Greenwich) and St. Alfedge Church (Greenwich), London. The repertoire will include works by Beethoven, Liszt, Prokofiev, Chopin, Bartók and L. Liebermann.

I was very happy to find Jay as a piano teacher for my two sons. He works hard to engage them in the subject and tailors the lessons to their individual needs, making sure they make progress whilst still enjoying playing music

My daughter has made excellent progress, thoroughly enjoying her lessons. In addition, Jay has broadened her appreciation of music by introducing her to a wide range of composers and styles.