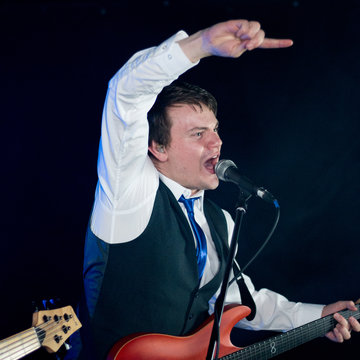 Check availability and get a free quote now - no commitment to book
From£160
Watch & Listen
About James
Song list
Reviews
Home page
James Nicholson
Like James?
Watch & Listen
1-3 of 4 videos

Electric Guitarist
Coventry
Public liability insurance of £10 million
Hi! I'm James, a guitar player living in Coventry. If you would like me to perform for your event please get in touch!

I've always been around music, whether it was singing in choirs as a child to playing drums in my teenage years, music has always been a massive part of my life. I have been performing since the age of 7. I picked up guitar at 14 and at age 18 I moved to Coventry to study guitar on Nexus ICA's Popular Music & Worship course. Throughout my time at Nexus I grew massively as a musician and I began playing in several originals and covers bands. Since finishing I have gigged across the country, everything from a tent outside, o2 academy venues, dingy pubs to MainStage at a festival. I have also performed at many wedding ceremonies and receptions with my band Stuck In The Groove. Currently I am studying Music Technology at Coventry University as I am pursuing work in recording and live sound.

Stuck in the Groove brought a wonderful atmosphere to our wedding day with their music. Nicola and James are great musicians and played beautiful music at our reception. They worked well with our preferences for the evening and played a lovely variety of chill out covers as guests arrived from the ceremony. Stuck in the Groove were polite, friendly and professional throughout the event. Many of our guests were thoroughly impressed by the music. Stuck in the Groove are a great choice for weddings and we would highly recommend them to other couples!

Stuck in the Groove was AMAZING! We loved having them perform at our wedding. Everyone danced all evening and they even did some of our favourite songs. And on top of that, our first dance was played live, which made it even more special. Thank you so much!

Stuck In The Groove packed a punch and brought the party atmosphere. Professional, punctual and loads of fun, these guys added so much to our wedding day bringing joy dancing and laughter. Their musicianship is incredible and Sheridan's voice is jaw dropping!

We massively enjoyed having you playing for my 50th Birthday party.  People were impressed with the quality of your music, and I appreciated the work you put into creating an appropriate playlist for the occasion. Thanks for helping make it a memorable event!

Thank you to everyone who made our reception so much fun! Nicola and James from Stuck in the Groove (check them out!) played lovely background music over dinner.