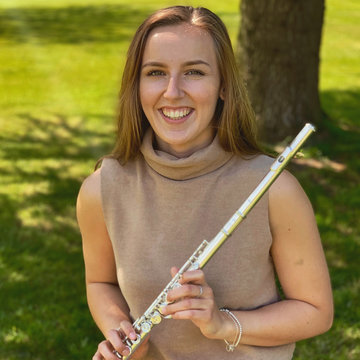 London based flautist studying at the Royal College of Music with Gitte Marcusson. Previously studied at Chethams and played in the NYO.
3 of 8 photos
Flautist
London

Isabelle Ashton is an undergraduate scholar student at the Royal College of Music in London, studying Flute with Gitte Marcusson. She is a Baring Foundation Award holder. Prior to her time at the RCM, Isabelle learnt in Manchester at Chetham's School of Music, studying with Linda Verrier, Belinda Gough and Fiona Fulton. She also attended Birmingham Junior Conservatoire on Saturdays from the age of 14-16, with Sandy Hay. Isabelle has participated in masterclasses with leading flautists such as Katherine Bryan, Adam Walker, Robert Winn, Gareth Davies, Mike Cox and Kate Hill. Isabelle has performed with the National Youth Orchestra and Wind Orchestra of Great Britain. She has played in venues including the Royal Albert Hall, Birmingham Symphony Hall, the Barbican and the Royal Festival Hall, as well as playing for world-renowned conductors such as Edward Gardner, Kristjan Järvi and Nicholos Collon. Isabelle also has a passion for tutoring, having gained her ABRSM Teaching Diploma with Distinction in 2019. She has a private practice, coaching students of all ages from beginner to advanced standard, in flute, piccolo, piano and music theory. She has helped pupils audition successfully for Chetham's School of Music and has a 100% ABRSM pass rate. Alongside private tutoring, Isabelle has spent the last few years leading and assisting in outreach workshops. This has ranged from classes with toddlers, using music-making to improve their confidence and communication skills, to aiding GCSE and A-Level students with their compositions and performances in schools around London. Isabelle is an advocate for the power of music and loves to bring the joy of it to as many people as she can. Isabelle also loves to play chamber music and has been working alongside her harpist, Maria McNamee, in the Marissa Duo for 5 years. They have performed across London, and offer weddings, private functions and concerts as well as education work, often playing as a trio with Viola as well. Isabelle is located between Leicestershire and London, travelling up and down the country for her work and studies. She is preparing for her final year at the Royal College of Music, hoping to later study a Masters in the Psychology of Music.

I have performed in many venues around London, including the Royal Albert Hall, the Barbican and the Royal Festival Hall. My Harpist and I have also performed at events in Greenwich at the Painted Hall and St Alfeges Church.

That would have to be the BBC Proms with the National Youth Orchestra of GB!

I always try my best to be flexible to help ensure events run as smoothly as possible. I would never double book myself on an event day, so I can leave room for last minute timetable changes. If anything changes in the run up to the event just let me know.

As a solo player, 1 hour is sufficient before the performance time. With a harpist, 1.5 hours would be appreciated, to tune the instrument before you guests arrive.

Yes, absolutely! If you'd like a pianist to accompany the flute, I can supply a keyboard. I also work with a Harpist (The Marissa Duo) and we would provide all the equipment.

If a song isn't included on my set list, there may still be a chance I already know it. If there is a special song you'd like to be played I am happy to do this for you. There is a fee of £20 for this service to take into account extra practice time. We can also have a Skype consultation with this price to talk through what you'd like.

Issy played in a Christmas concert I organised in 2019. She is a highly accomplished flute player, always delivering to a professional standard. I can warmly recommend her for her lyrical and energetic playing as well as her lovely personality.

An opportunity arose via a friend in her final year student at Cambridge University, to record any musical work, with the offer of a three hour recording session and subsequent editing as part of her final year work. With only ten day’s notice, I booked Issy Ashton and the pianist Joseph Cummings, who had barely enough time to work on the piece before the day of the recording. As an added pressure, on arrival at the studio one of the two recording engineers told me that the equipment would not work properly, so he left to rush home and grab his own mixing desk. By the time he had returned, the other engineer had just managed to get it up and running, but we now only had half the original time to rehearse and record! Issy and Joe had managed to meet up the previous week to run through the work; the challenge for both of them being that it is not a well-known work, so there were no previous recordings to listen to, and not a wealth of previous performances to weigh up and interpret. Each movement was rehearsed for about 15 minutes and then recorded; the first movement was recorded in three different sections to save time for the pianist, who had to rush back to London; the middle section being a flute cadenza. From my point of view, as the composer of the work, it was a very moving experience to hear Issy’s interpretation of the music. Although she had commissioned it when aged 15, she had yet not felt ready to do it justice and the sudden opportunity to make the recording meant a lot of preparation compressed into a fairly short lead time. Nonetheless it is a very good performance of the work as conceived, and an ideal recording to represent the ideals which Issy requested at the time of the commission, and which I realised in the composition. I have known Issy since she was a young beginner, but our paths had not crossed musically since she had left the area to study at the Royal College of Music. The standard of professionalism she brought to the recording session, coupled with her interpretation of the work, left me in no doubt as to her ability to hold her own in the flute world, so much so that I have arranged for the work to be orchestrated, with Issy publicly premiering it in November of this year, with a small symphony orchestra. Nick Planas, August 2020