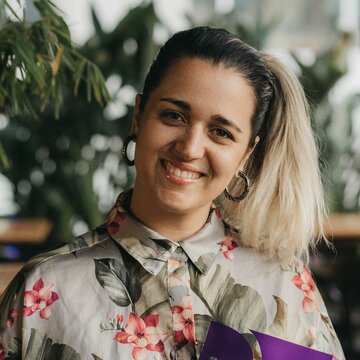 Ines Loubet is a singer, composer and music educator. She was born in Porto, in 1992, and has a degree in Jazz Voice from the Guildhall School of Music & Drama where she graduated with distinction. She currently teaches at Guildhall School of Music Jazz Department. Currently, besides leading many voice workshops in several countries in Europe, she works in Portugal with a female acapella group  “Sopa de Pedra”, dedicated to research and explore traditional Portuguese folk songs. She also performs with her own world music ensemble Caravela that have just done an European tour and released an EP as well as being the lead singer in other jazz groups (Rhythms of the City, Bahla). She has recorded with Bahla, Waaju, Sopa de Pedra and Caravela.

My vocal expertise, musicianship, energy & enthusiasm; my professionalism and commitment and how I am able to create a lively and atmospheric mood with my set list of Bossa Nova and Jazz.

Absolutely. This is a really popular request and we actually offer this service for free. If you'd like a DJ service via our PA after the final set until the venue closes, we provide this for an additional £150

Thank you SO much for all your brought to the party, your vocal expertise, energy & enthusiasm were infectious! Such a great night - we were blown away! Blessings Nikki x

Hi Inês, thank you SO much for all you brought to the party, your vocal expertise, energy & enthusiasm were infectious! Such a great night - we were blown away! Please thank the band too. Blessings, Nikki

Caravela were such a special part of our wedding day, and we were so impressed by their professionalism and commitment to making the music absolutely spot on. They set a lively and atmospheric mood with their set list of Bossa Nova and Jazz, and later in the evening played their take on some of our requested tunes including Jewish celebration music and other more contemporary songs. Caravela’s musicianship is some of the best on the scene and we were so thrilled that they were a part of our wedding. We wouldn’t hesitate to recommend them and hope to be able to book them again for our next party!

Caravela were the perfect sound to our reception, and they were even able to play one of my favourite songs by Djavan. They were able to respond really well the crowd too, I can’t wait to have another reason to hire them! We all had a great time dancing to them and the whole evening went perfectly.

The passion of her singing, an extraordinary and transcendent vocal performance.

Loubet’s voice is truly an instrument in itself, and her harmonies are almost unsettlingly pure.

“…A joy to listen to - astonishing stuff!”