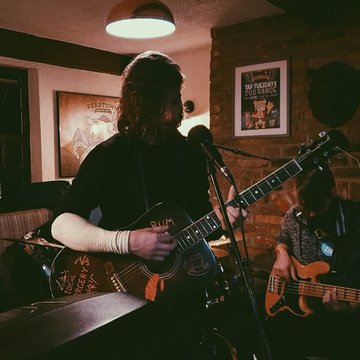 Ideal Forgery are a Manchester based Alternative Indie Band. Aside from our original music, we play Acoustic Covers in our own unique style.
3 of 5 photos
Alternative band
Manchester

Ideal Forgery are a Manchester based Alternative Indie Rock Band. Recently described as ‘an undiscovered diamond in the rough’ they strive to write ‘good music on real instruments’ which has had a heartfelt impact on their fanbase. The band consists of Zak “James” Heaney (Lead Vocals/ Acoustic Guitar), Mikey “Tee” (Lead Guitar), Polly “Magic” Virr (Cello), George “The Charm” Wright (Bass) and Peter “Owen” Mitchell (Drums/ Percussion). The bands sound is driven by Zak’s ambition to create music that reaches out to people; through lyrics, raw emotion, power, edge and a mutual understanding of the everyday struggles many people face. They’re influenced by a variety of musical styles including; Indie, Acoustic, Orchestral, Post-Punk, Folk and Rock. They have recently released their new E.P.- DEBUT which is available to listen to on Spotify, ITunes, Sound cloud; Check it out!

'an undiscovered diamond in the rough'

One of the best gigs i've ever been to