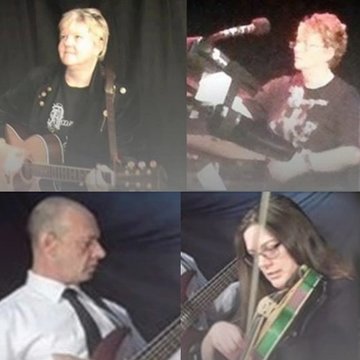 Hounds of the Sea

About Hounds of the Sea

Hounds of the Sea bring you Traditional Irish Songs, Scottish Songs, and all types of Celtic Songs and Instrumentals. Hounds of the Sea, who are appearing at The Queens Hall on Friday September 15th, are a leading Welsh Folk Band who play Traditional Folk Songs with vibrant energy. They have had an enormously successful 2017 playing Festivals and Concerts around the UK, and have been described as the Welsh Steeleye Span for their brilliant arrangements of Traditional Folk, and the Welsh Peatbog Faeries for their energy and exciting performances. Certainly not a Band to miss with their sensitivity and their high degree of musicianship, as well as the rhythm which makes everyone want to dance.They recently wowed a capacity audience at the Fishguard Folk Festival, who responded to Hounds with huge enthusiasm. The Hounds line up of multi-vocals, Guitars, Mandolins, Fiddles, keyboards, bass and drums gives a dynamic sound, which is the best of Folk Music with the energy of the Peatbog Faeries. If you want an evening of wonderful music, top class arrangements and traditional songs, the Hounds of the Sea will give you a fantastic evening to remember. Perryn Butler has been a singer and guitarist for all her working life. Her work has taken her all over the British Isles, playing with bands as well as being a solo artist. She concentrated on playing traditional folk songs in the folk clubs and venues, where she sang and played guitar on her own. Her voice is very rich, and she is able to sing in any style with enormous conviction. She and Gaynor have been writing and performing together for 25 years, so a very experienced as well as accomplished partnership. She plsays Guitar, Mandolin, Bazouki and Bodhran as well as singing. Gaynor Colbourn is a classically trained pianist, and the composer and arranger of the bulk of the music alongside Perryn for Amazonne. She is also the producer and sound engineer for all the music which they both write and the whole band perform. Gaynor, a Doc Mus qualified as a Classical Pianist, but went straight on the road with a heavy rock band called Fusion, learning the ropes the hard way. She enjoyed several years of this, before becoming a session musician and composer. She is known as a Keyboard Wizard, and has a very well respected reputation as a superb session musician who can play any style with ease. Currently, as well as working with Hounds and Amazonne, Gaynor, who has some very well know TV Theme tunes to her credit is Lecturing around the UK, running Clinics, and creating competition music for Dressage to Music, and Perryn is an Internationally renowned sculptor. Their Musical, The Fire of London was a huge success, and is shortly to move to a regional theatre prior to hitting London. Holly Robinson. As a classically trained Fiddler coming from a Folk background, Holly has risen to the challenge of playing cross over Folk, Rock, Metal and Musical Theatre. She and Oliver play terrific dual solos together, giving yet another unique sound to Amazonne. One minute she'll be playing a folk solo, next, Metal Fiddle, so her versatility grows all the time. The three fiddles she plays are very different, the Octave fiddle suits the rock and metal, the traditional fiddle is a lighter more delicate sound, so she uses it for more traditional sections, and the rare 5 string fiddle also made by Tom Phillips, crosses between all three. Mike Forwood. Mike is a terrifically talented bass guitarist, with a wealth of experience playing in many different bands over the years and an experienced sound and outside broadcast engineer working in Radio. He is Hounds and Amazonne's rock, working very closely with Gaynor, giving that deep sound everyone expects from Hounds and Amazonne.

I saw Hounds at the Fishguard Folk Festival, they're blooming BRILLIANT!!We've bought tickets to see them in concert at The Queens Hall in September.

Hounds of the Sea were msarvelous at the Fishguard Foplk Festival, they were standing room only, and at least 100 or more people were turned away as not enough room to see this fabulous band.

Burryport Festival were so luicky to get Hounds to co,me and play. They were just fantastic, awesome, so good.

We had a fabulous night watching and dancing to this top band. We love Steeleye Span and Peatbog Faeries, and they're every bit as good as them!