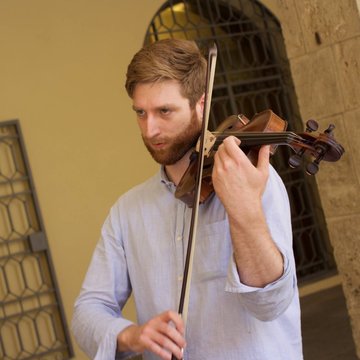 Originally from Northamptonshire and based in Manchester, Henry Rankin is a violinist, violist and multi-instrumentalist. In 2014 he graduated from the University of Manchester, having studied violin with Julia Hanson, and recently completed a MMUS at the Royal Northern College of Music studying violin and viola with Susie Mészáros (with generous support from the Edna Newill Charitable Trust). He also studied baroque viola with Annette Isserlis. Henry enjoys an active and eclectic performing calendar in a wide array of styles and genres. He has performed with ensembles and orchestras such as Skipton Camerata, Kaleidoscope Orchestra, Jersey Chamber Orchestra and The Soundscape Chamber Orchestra. Henry was accepted onto the 2016/17 RNCM Professional Experience Scheme with the Manchester Camerata on the viola. He has also worked with artists such as Public Service Broadcasting, Lissie, The Travelling Band, Sophie Morgan and Chloe Foy. Henry recently performed with singer/songwriter Sophie Morgan supporting The Waterboys on their UK/European tour. A committed advocate of contemporary classical music, Henry has worked with composers Michael Finnissy, Heiner Goebbels and Harrison Birtwistle through the University of Manchester and performed and premiered works for solo violin with the dd/mm/yy concert series. Henry has performed in numerous solo masterclasses on violin and viola with Lawrence Power, Annette Isserlis, Paul Barritt, Yair Kless and Fionnuala Hunt.