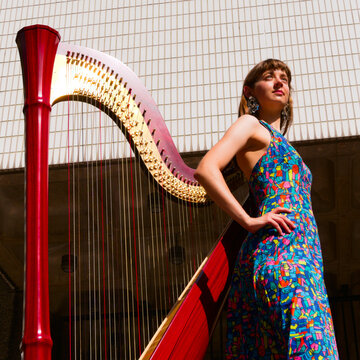 "A natural storyteller" "Sensitive, elegant, refined playing - a true artist to behold" "Intelligent transcription, every note mattered” Helena is an award-winning virtuoso harpist with a charismatic personality, praised for her communication on and off stage. With an entrepreneurial spirit, Helena has the ambition to spread classical music and present the harp as a solo instrument to wider audiences. A recent graduate from the Guildhall School of Music & Drama in London with the highest honours, Helena has appeared solo at prestigious venues such as the Wigmore Hall, Barbican Hall, Milton Court, LSO St-Luke’s, Centro Botin with the Encuentro de Santander Academy in Spain. She toured with the Philharmonie der Animato Orchestra throughout Europe with a final concert at the Vienna Konzerthaus. This Summer 2019 Helena took part in the prestigious Britten-Pears “Composition and Performance Course”, was selected for the Orchestre de la Francophonie in Canada, the European Union Youth Wind Orchestra EUYWO in Luxembourg and also as a reserve for the Schleswig-Holstein Festival Academy in Germany and London Philharmonic Orchestra Foyle Future First Artist. She was one of the ten European musicians to be selected for the Tuning In Artist Programme in Partnership with the MDW University of Vienna, Mica Austria and the European Union. Helena has already played for numerous festivals, among which the LIFT Festival, the Curious Festival, Culture Mile, Fetes de la Musique in Switzerland and has recently been invited to take part in the Aldeburgh Festival in 2020. Willing to promote the harp to a wider audience and to challenge the perception of the harp as a solo instrument she is the founder of MUSILUX, the world’s first classical harp and production company. She has been selected as a Guildhall Creative Entrepreneur 2019/20 to bring this innovative and thrilling project to life. Helena has won many awards and is grateful for the support from the Help Musicians Postgraduate Awards, Irene Denereaz and SUISA Foundations, Henry Wood Trust, Chizel Educational Trust, Kathleen Trust and Guildhall School Trust.

I will always try my best to be flexible to help ensure your event runs as smoothly as possible. If timings change slightly in the run up to the event just let me know.

I usually set up 45 minutes in advance to allow enough time to meet you, confirm last minute details, tune the harp and get ready for your event.

Yes for London zone 1-2. Outside of these, additional charges may vary.

None at all - my instrument is played acoustically so I don't need any equipment. If it is raining then I will need full cover or to perform indoors as my instrument is valuable and could be damaged.

My set lists are crafted from countless performances and learning what works best to ensure guests have an amazing time. However, I am definitely happy to chat through and make sure we find what works for your event.

If a song isn't included in my song list there may still be a chance I already know it. If there is a special piece you like, there is an additional fee of £85 - taking into account learning and rehearsal time. I would kindly ask you to give me 10 days' notice for a song request so that I can perform it to my usual high standard.

I am known for my virtuosic playing, original repertoire, charismatic personality and great communication skills.

I have performed throughout Europe in venues and acclaimed festivals, such as Wigmore Hall, Barbican, LSO St Luke's, Palacio de Festivales in Spain, Guildhall, Mansion House, Westfield Shopping Centre, Vienna Konzerthaus, City of London churches and corporations, and many more!

I listen to a lot of classical music of course by players like Víkingur Ólafsson, Martin Fröst, Xavier de Maistre, but also French Chanson like William Sheller, Pink Martini, pop music by the likes of Stromae, Yodelice, Rihanna, and lots of movie soundtracks lately.

I have performed with critical acclaim at high-profile events for celebrities, VIP galas and select dinners. Some of my recent concerts include solo appearances at Wigmore Hall, playing for the Mayor of London at Mansion House, Annual Sugar Association, BNP Paribas Annual banquet, Centro Botin Anniversary in the presence of its architect Renzo Piano (Shard).