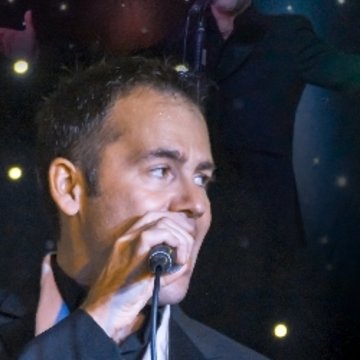 With a powerful and captivating voice that has been compared to a diverse range of people from “Robbie Williams” to “Joe Longthorne” and a unique style, His audience, be they young or old, will be sure to enjoy the night. 20 years on from his first tentative steps into professional entertainment, This entertainer is getting stronger and stronger. Two decade of experience, six decades of hits! Miss it... Miss Out! From a Pontin’s Bluecoat to one fifth of boyband “Force Five” his career has spanned many different facets of the industry. Theatre credits include: ‘Cheeky Charlie’ in ‘Pound Puppies & The Secret Treasure Map’ (Bournemouth International Centre & Touring) ‘Horis De Hotpot’ (henchman) in ‘Snow White & The Seven Dwarves’ (Scunthorpe Plowright Theatre) ‘Reg’ in ‘Dame Lucy Bun & Reg’ (Morgans, Benidorm & Touring UK) Lead Vocalist in "Movie Musical Magic" Performances also include numerous other Panto & Cabaret appearances, As well as being directly involved in bringing ‘Banana’s In Pyjamas’ to the UK stage. Television Credits include appearances on Hollyoaks, Coronation Street, Cutting it, Brookside, Peaky Blinders & Cops. As well as currently appearing in the Creditfix commercial as "Steve". He also made an appearance on the penultimate episode of ‘Popstars’ alongside bandmates at the time, Kevin Simm(Liberty X) & James Fox (Fame Academy, Eurovision Song Contest). His shows include hits from the 1950’s to the present day, From Rock to Swing, Robbie Williams to Ceelo Green. A wide variety of music almost guaranteed to touch on everyone's tastes. PA is provided as standard when needed, and lighting (both general & effects)is available by request at the time of booking. An entertainer, not just a vocalist. Music for a wide variety of tastes. Available solo or with backing band.

Timings of an hour or so change won't affect your booking as long as you let me know in plenty of time.

I can provide background music before and between sets, but afterwards I will be packing up, but will play music until I've changed and started packing the PA. If you have anything specific let me know with at least a weeks notice so I can download playlists. Or if you provide an iPod or similar with your own playlist, I can plug that in for you as well.

1 hour. It doesn't take this long usually, but it's worth having the safety net.

If you let me know in plenty of time, I will try to accommodate your requests, if they are suitable for my voice.

Certainly! All PA is provided, and if you let me know if the venue has lights or not, I will bring lighting when needed.

Standard Prices
All prices include:Pa equipment, lighting, up to 40 miles (each way) travel. I do not charge VAT so prices are as displayed.

well i have given many good reviews over the last nine months but nobody deserved it more than this guy. wot an entertainer he his, and i have never seen so many people stay till the end and then approach the stage to shake his hand. please please please hurry back. SANDYS WAITING

Thanks for a great night. The music was excellent and had my whole party up and dancing all night. I am so pleased a friend is booking you for their party and looking forward to hearing you again.

He was amazing! Delighted I booked him! So much fun! Best surprise ever and I even got to do a duet with him on my wedding day! Excellent service! Fabulous performance! Thanks guys!

An exciting performer. Started off in dress suit, quickly changed to Grease 'T Birds' leathers and his second half outfit was something else! He gave us a varied programme and managed to create a fantastic bond with a 'thin' audience. I'd like to see him interact with 100 there