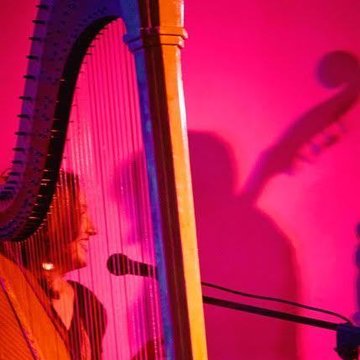 About Harp n' Bass on tour

LONDON MILAN
Diane Peters on Harp and vocals has collaborated with some world renowned bass players in the project here featuring Yuri Goloubev.

"Harp n' Bass on tour” A unique project lead by Diane Peters using her own original material, and collaborations with some of Europe and Australia's leading bass names. The unusual sound of Jazz on the harp enriched by the sound of the double bass, and the combination of the 2 instruments , creating in itself a new sound in JAZZ. The project evolves with the improvisations and evolutions each players sound and personality bring to the music. Diane Peters on Harp and vocals has collaborated with some world renowned bass players in her project Harp and Bass on Tour now featuring the Russian bassist YURI GOLOUBEV (UK and Italy.) She has played this project with NICK HAYWOOD in Tas. AU , LYNDON GRAY Adelaide AU, ANTONELLA MAZZA Paris, BRUNO ROUSELET Paris, TAMARA MURPHY - Melbourne AU. In Italy she has also performed with STEFANO SENNI and DANILO GALLO in other formations. DIANE PETERS: Diane Peters - Jazz harpist / composer Bachelor of Music in Performance, Jazz/improvisation and composition at VCA, and Honours at Monash Uni Melbourne, Australia, Diane has performed solo and in groups in Melbourne, New York, Paris, Belgium, and Amsterdam at the (5th European harp symposium). A CD of all origional compositions in quintet “Diane Peters’ARCHAEOPTEREX” was released by Newmarket records in 2001. In Italy since 2005 collaborates with musicians including Stefano Benini, Maria Vicentini and with Yuri Goloubev. She has recorded for Nicola Conte (Blue Note Jazz). Highlights for 2016 include Filharmonic theatre Verona with Benini, performing original score Romeo & Juliet for Shakespeare in Veneto, and cafeAmaro single and CD launch 16/ 17. YURI GOLOUBEV: Yuri Goloubev - Jazz Bassist / Composer/ Teacher Yuri Russian bassist with a virtuoso beginning in music, has moved from the classical world of the Royal Albert Hall and Concertgebow to the jazz world of the Montreux Jazz Festival and Ronnie Scott’s, with utter conviction. His playing, the fluidity of which is often likened to a wind instrumentalist, is immediately recognisable and inimitable. His compositions and his instrumental abilities have been featured on nearly 100 CDs to date released by such labels as ACT, Universal, Abeat, Red Records, Basho and many more. Some of Yuri's notable jazz collaborations include: Bob James, Kenny Werner, Ralph Towner, Gwilym Simcock, Julian Arguelles, Paolo Fresu, Tim Garland, Enrico Pieranunzi, Wolfgang Muthspiel, Klaus Gesing, Rosario Giuliani, Rick Margitza, Asaf Sirkis and many others. He is a highly sought-after and much-respected collaborator for a number of international projects, and records and tours worldwide with a multitude of bands. He is also part of the world-class trio (with Gwilym Simcock and James Maddren) which accompanies the BBC Young Musician Jazz Award final every two years, last held in May 2016.

There have been preciouse few harpists in jazz history, Alice Coltrane being the most notable. Diane Peters does her bit… the music is undeniably distinctive

Yuri's voice is so distinctive; what he does with his instrument is a unique thing