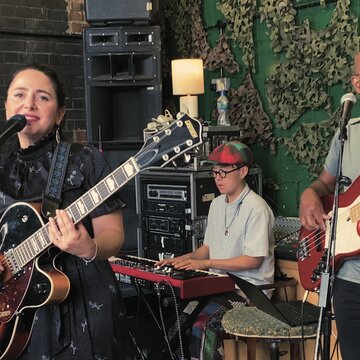 HULOS are a duo, Cris Tanzi on vocals and guitar and Nick Lenner-Webster on double bass. performing Motwon, Soul Jazz and R&b classics

Cris Tanzi is a London-based jazz/soul singer with a unique sultry voice. Hailing from Italy, Cris came to London to follow her passion for jazz after being classically trained in Parma. Her love of the genre led her to complete a degree in Jazz at Middlesex University where she specialised in vocals and piano and guitar. In 2008 she formed a Jazz Function project with guitarist Oliver Staines and has been entertaining audiences throughout London, Italy and the UK for over 8 years with an extensive repertoire of jazz standards. In early 2017 Cris and long time friend bassist Nick Lenner-Webster decided to form a Soul and R&B duo called HULOS, performing Motown classics and some upbeat Jazz standards they are now performing for private parties, pubs, restaurants and weddings. Cris delivers a stunning, classy and soulful performance that will create a magical atmosphere for yourself and your guests. Nick Lenner-Webster is a professional Double bass and Electric Bass player based in London. He has worked in a variety venues across the country including Ronnie Scotts, The Royal Albert Hall, The Royal Festival Hall, The Vortex, The Roundhouse and Glastonbury festival . Nick also played in an orchestra of 150 musicians for the world premier of John Cage/Merce Cunningham’s Ballet ‘Ocean’

yes I can if playing unplugged but not the bassist

some you can of course

yes I am very happy to do so

They usually compliment on how we have arranged the songs to fit the duo and make many positive comments on my voice and the upright bass player's sound.

The green Note in Camden ( the basement part), the Boogaloo in Archway, The Bedford Tavern in Islington and the Bolton Pub to name a few

I performed in a secret location in the British countryside in front of many politicians including Boris Johnson. we were told not to post any photos of the gig on Social Media so it will forever remain between me and my musicians that night.

Standard Prices
2 musicians
All prices include:PA, equipment, travel within London if venue is within walking distance from Tube or Bus.

Verified
Peter B, 2 months ago

Thank you so much for making my party special!You sound lovely and i will pass your number to few of my clients who already asked about you