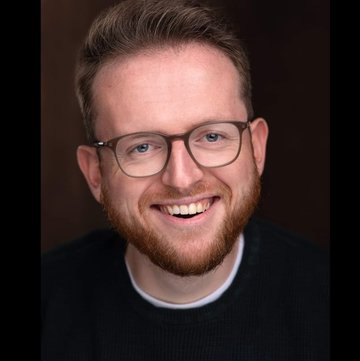 Check availability and get a free quote now - no commitment to book
From£180
Watch & Listen
About Greg
Song list
Reviews
Home page
Greg Link
Like Greg?
Watch & Listen
1-3 of 4 videos

Greg studied Music at The University of Nottingham, McGill University in Montreal, and at the Royal Northern College of Music. Since 2013, he has sung with the award-winning professional British a cappella quintet Apollo5 and enjoys a busy schedule of performances, recording, and education projects with the vocal ensemble around the country and internationally. Greg has also arranged many pieces for the group, and for its partner ensemble, VOCES8, which have been performed in concerts and workshops across the UK as well as around Europe, America and Asia. Greg has both performed and directed choral music, theatre, opera, and musical theatre across the UK and abroad. Solo highlights include Raphael/Adam in Haydn's The Creation, performing in a new chamber opera premiered at Handel House, and 'The Ballad of Whitechapel', a music theatre production debuted at the National Portrait Gallery. He has also performed with the National Youth Music Theatre, in productions at the Nottingham New Theatre as both an actor and musical director, and has worked with a number of theatre companies as a vocal coach in both London and Auckland, New Zealand. As a Musical Director, Greg has enjoyed working with St Alfege Youth Choir in Greenwich and with many ensembles at Nottingham University including its chamber choir, opera company, and musical theatre society, with which he has performed at the Edinburgh Festival Fringe. Greg has held singing positions at cathedrals, churches and chapels in Auckland, Montréal, London and Nottingham. He also works with the National Youth Choirs of GB as a music tutor and consort leader, having previously performed as a singer with the organisation for over a decade beforehand, progressing to Bass Section Leader. Further music education work includes music mentoring with London Youth Choir, leading workshops in partnership with the BBC, and with many schools, universities, and music festivals in projects with Apollo5 and VOCES8 around the world.

Greg is an exceptional musician and performer who combines creativity, precision and adventurousness to great effect. As a musical director, Greg brings the best possible from his vocalists and musicians. As a performer he never fails to impress, not only with his vocal, but also his acting versatility. Personally, I have very much enjoyed every opportunity I have had to work with Greg and he has been a huge creative influence on my own work.

Greg is very ambitious with a strong sense of determination and dedication in his pursuit of excellence. He works hard to continue refining his craft.

Greg is an outstandingly good ensemble singer. He has a lovely voice with which he can sing solos excellently, but it is his team playing spirit which is the most remarkable, and a very fine attribute. He makes a lovely sound right across the baritone range, and sight reads faultlessly. He is liked by everyone, and has a delightful way of deferring, in the best sense, to others. As such, he is the perfect ensemble singer.