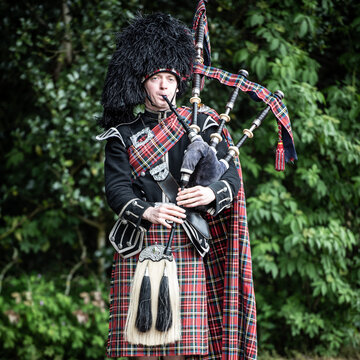 Grant has piped at weddings and events from a very young age and has over 15 years of experience in doing so. Grant has played at well known Borders wedding and event venues such as: Melrose Abbey, Thirlestane Castel Lauder, Peebles Hydro, Barony Castle, Cringletie Hotel, Macdonald Cardrona Hotel, Abbotsford House, Neidpath Castle, Dryburgh Abbey & Hotel, Roxburghe Hotel Kelso, Buccleuch Arms Hotel St Boswells, Floors Castle, Philipburn Country House Hotel Selkirk, Ednam House Hotel Kelso, Mansfield House Hotel Hawick and Duns Castle. Grant can travel all over Scotland and the North of England. Venues he has performed at in Scotland include; Edinburgh Castle, Murrayfield Stadium, Dundas Castle, Norton House Hotel, Shieldhill Castle Biggar, The Falkirk Wheel, Cornhill Castle Hotel Biggar, Dunblane Hydro, Toftcombs Mansion House Biggar & the Edinburgh Corn Exchange to name a few. He has also received a warm welcome across the border playing in the North of England at Bamburgh Castle and Cuddystone Hall on a number of occasions. The main duties for a piper at a wedding include piping for guests arriving, playing the bride down the aisle, playing for bride & groom leaving the ceremony and piping the newly wed couple into the reception meal. Grant can do more or less depending on your needs. A bagpiper at a wedding provides traditional Scottish music with the tartan flare of full number one highland dress.

I am extremely flexible. Just let me know as soon as you can and there wont be any problems.

I always make sure my pipes are ready to go before arriving at a wedding/event. When I arrive I will only need 10-15 to warm the pipe again and tune the drones.

If you know exactly what tunes you would like played then of course.

Yes, I own my instrument.

Yes, I have been playing the bagpipes for 20 years so I have a large repertoire of music learned over the years. My song list is made up from the most requested tunes on the bagpipes. If you would like a song played that isn't originally written for the bagpipes. This would depend if it can be played on the bagpipes.

Grant was perfect. He was so flexible with our change of dates, always helping and understanding. He arrived early and was happy to adapt to our ceremony. His performance was amazing and made it so special. We can’t recommend’ him enough ! Thank you so so much.

Hi Grant, Now that all the birthday celebrations are past, I would just like to thank you for piping at Aikwood Tower for my twin brother. He loved it and it made our birthday celebration even more special. We have some great pictures and videos to remind us of the night. Thank you again, and if I hear of anyone that needs a piper I will certainly pass on your name. Kind regards Lorna Vannan

We cannot say enough good things about Grant. He is professional, friendly, helpful and most of all an excellent piper! From the very first point of contact through to the day itself, nothing was too much trouble for Grant. He was so helpful in the planning stages, and worked closely with us to ensure we were happy. We had such great feedback from our guests on the day, and continue to receive compliments about our wedding piper even now! Grant thoroughly enhanced our wedding day with his skills. He was the friendliest and most positive person we dealt with when planning our wedding. Many of our happiest and most memorable moments of the day involve Grant and his piping - he exceeded our expectations and we thoroughly recommend him. Helen and Dave.