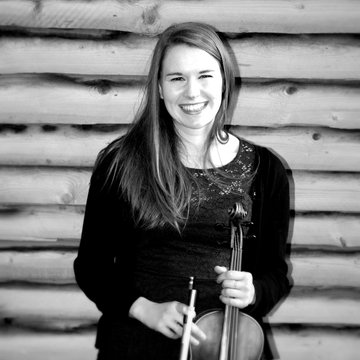 Grace began playing the violin aged 4 at the Royal Welsh College of Music and Drama, and is now studying at Trinity Laban Conservatoire of Music and Dance with Diana Cummings. She was a member of Cardiff County and Vale of Glamorgan Schools Orchestras for ten years, culminating in leading the County Youth Orchestra. She was also a member of the National Youth Orchestra of Wales for 7 years, touring with them in the UK and Germany. Through the NYOW she has taken part in four collaborations with the BBC National Orchestra of Wales, performing Bernstein’s Mass at the 2012 Proms. Grace is a keen orchestral musician, and has played with many orchestras since living in London, including the University of London Symphony Orchestra, Young musicians Symphony Orchestra, Ernest Reed Symphony Orchestra, Orchestra Vitae, the London Beethoven Project and the Swinsian Ensemble. Through studying at Trinity Laban, Grace has had the chance to play in many different ensembles including symphony orchestras, string ensembles and opera orchestras. She has also played chamber music since she was ten, and is currently a member of the Horizon quartet in London, arranging and providing a variety of music for weddings and other functions.

The whole of experience, from the booking to the performance was excellent.

We could not have wished for better. They played beautifully...