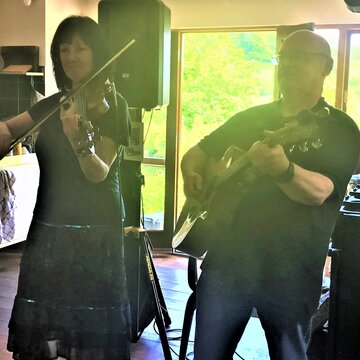 Gill has been playing violin since she was 13, having also learned piano & the clarinet. Her mother was a professional classical singer and piano teacher but both Grandfathers had played violin and their instruments were stored at home. One thing soon led to another! The school system steered her into classical music and she was the leader of her first orchestra by the age of 15, reaching Grade 8. Gill has been under the baton of Simon Rattle, if you will pardon the expression, she recorded her first album in 1978. She played the Star Wars theme music in 1978 in the Hampshire County Youth Orchestra - the first orchestra to do so after Spielberg & Co - and to date has never found a more difficult piece of music. Dig it out and listen to the strings. It was Riverdance and The Corrs who awakened an interest in irish music, which led to forming her own band in 2006. More recently she has returned to playing the clarinet, inspired and taught by Helen Gentile from the band Threepenny Bit. Gill plays in her own band Celtic Confusion but has also played with others, amongst them the Treefellahs, Murphy's Lore, Agglestone, Cottage Industry and The Bushwhackers.

Verified
Ben B, 1 year ago

Celtic Confusion have played for us at Norden Farm Campsite a number of times during the summer of 2019, and prior to that. We received great feedback from our customers about the music and it was ideal for campers of all ages. The communication from Gill was fantastic and we would highly recommend them and look forward to seeing them again in 2020.

I would just like to say thank you again for last Saturday, really excellent stuff!! Among lots of lovely tunes I particularly enjoyed The Monaghan Jig and Crested Hens. I also think both sound good on the whistle. I am also enjoying the CD and hope to whistle along to that when I get the chance. Anyway, it was good to meet you both and I hope to catch you somewhere soon. Please come back to Hythe!! In fact I overheard people talking about Celtic Confusion down the village this morning.