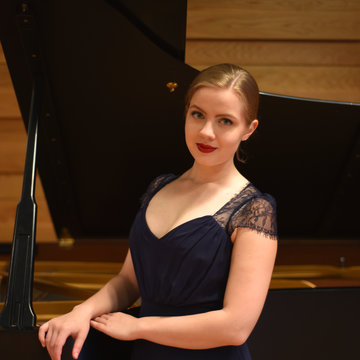 Check availability and get a free quote now - no commitment to book
From£180
About Gabriele
Home page
Gabriele Bekeryte
Like Gabriele?

Gabriele Bekeryte was born in Vilnius, Lithuania in 1997. She started playing piano at the age of 6. In 2004 she started attending National M. K. Ciurlionis School of Arts and her first piano teacher was Violeta Balcytiene. From later she studied in Jurate Terese Karosaite‘s class up until 2014 when she moved to London and started attending The Purcell School for Young Musicians. She received a full scholarship and became a student under Tatiana Sarkissova. In 2016 Gabriele received a place at The Royal Academy of Music and she is continuing her studies there. Throughout Gabriele‘s year of playing she has taken part and won in national and international competitions. Some of them are „Les Rencontres Internationales des Jeunes Pianistes” in Belgium, 3rd place (2007, 2012), “4 Concorso pianistico Internazionale “Mozart”in Italy, 3rd place (2009), “Nacionalinis Balio Dvariono pianistų ir stygininkų konkursas” in Lithuania, laureate (2010, 2012), “59. Internationalen Klavierspiel-Wettbewerb 2013 zu Ehren von Clara Schumann "Grotrian-Steinweg”in Germany, 2nd place (2013). Gabriele has performed in some top venues both as a soloist and a chamber musician such as Vilnius Town Hall (Lithuania), The Wigmore Hall, Saint-Martins-On-The-Fields, The Milton Court, The Fazioli Hall (Italy). She participated in festivals and masterclasses where she played to Michael Lewin, Bernard d‘Ascoli, Dmitri Alexeev, T. Tawaststjerna, Andrius Zlabys and others.