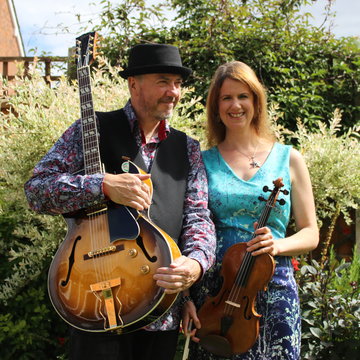 About Fret and Fiddle

Fret and Fiddle are an award-winning group who formed in 2001 as a duo when Sallly and Andy discovered they had a mutual enthusiasm for The Hot Club de France, namely, the musical legends guitarist Django Reinhardt and violinist Stephane Grappelli. Over the years they have expanded to a trio, then a quartet, and now can offer a wide variety of combinations to suit any occasion or event. Their quartet play the show “Grappelli Swing” a narrated musical journey of Stephane Grappelli's musical life, which regularly tours in the Midlands and beyond. Offering that special something that is just that little bit different, quirky and imaginative, you can hear this band play swing tunes, gypsy music, klezmer, folk, blues and even the odd Tom Waits song!

We are lively and very entertaining

Sally is our singer and violinist, you wont get anyone else.

“Absolutely. This is a really popular request and we actually offer this service for free. If you'd like a DJ service via our PA after the final set until the venue closes, we provide this for an additional £100.”

Our PA and lighting system is included in your quote.

All prices include:P.A equipment and lights provided.
Packages
Drinks reception5 musicians
Two performances of up to 45 mins each during your drinks reception
£800