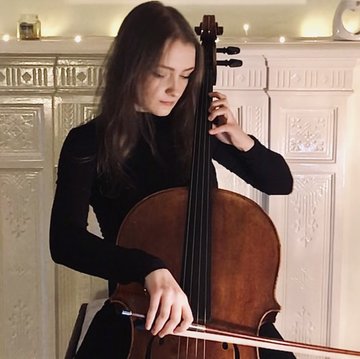 London based cellist and graduate of the Royal Academy of Music. Guaranteed to add class to any event and make it extra special.
3 of 3 photos
Cellist
London
Public liability insurance of £10 million

Francesca attended Chetham’s School of Music from the age of 10 and is currently in her final year at the Royal Academy of Music studying with Josephine Knight. Throughout her studies Francesca has had masterclasses with many distinguished cellists such as Guy Johnston, Hannah Roberts, Sung Won Yang, and most recently a live streamed class with Alisa Weilerstein. She has performed solo recitals at various venues around the country including two St James’s Piccadilly performances in 2016 and 2019. She has also been invited to play abroad including performances at the Municipal Theatre in Fontainebleau, France and Konstanz Cathedral in Germany. In 2016 she played Elgar’s Cello Concerto with the Chester Philharmonic. Fran has been surrounded by chamber music from a young age, her first string quartet being the first school aged group to be invited to play for Richard Ireland in his Masterclass program at Kings Place. Continuing her love of chamber music throughout her studies she has performed at many venues around the UK including a performance of Ravel’s String Quartet at the Wigmore Hall. Other performances include the Draper’s Hall in London with Leeds International Piano Competition finalist Anna Geniushene, Lincoln Cathedral performing along-side pianist and broadcaster David Owen Norris and British tenor Marke Wilde. She has also collaborated with the prestigious London Russian Ballet School performing at the London Palladium and Cadogan Hall. In August 2019 Francesca returned to Chetham’s to perform in the International Piano Festival playing the Schumann Piano Quintet with pianist Peter Frankl. Francesca has won many awards and competitions as a chamber musician as well as been invited to play abroad. Countries include Norway, France, Italy and Germany. Francesca has performed major orchestral works at the Royal Festival Hall, the Barbican and Bridgewater Hall working with world-renowned conductors such as Sir Mark Elder, Paul Mann and Jac Van Steen. Fran was also lucky enough to be involved with James Newton Howard’s 3 Decades of Music for Hollywood tour performing at the Royal Albert Hall with the Royal Academy Symphony Orchestra conducted by the composer.

I am incredibly flexible when it comes to repertoire I pride myself on giving great performances of any genre. My playing!

I am able to offer different line ups which include cello duo, string quartet, cello and violin, cello and piano. Prices vary.

I always try to be as flexible as I can. If plans change just contact me asap.

We can curate your own personal set list and I can also custom arrange many pieces and songs.

All I need is a chair.

Standard Prices
All prices include:Phone consultation if needed, custom arrangements of the pieces/ songs you choose.

Francesca was perfect. I asked for Bach's first prelude to walk down the aisle to and she played it so beautifully, it was exactly how I imagined. Thank you so much.

Will definitely book Francesca again! Everything that was requested was arranged and played amazingly. All the guests were really complimentary. Thanks Fran!