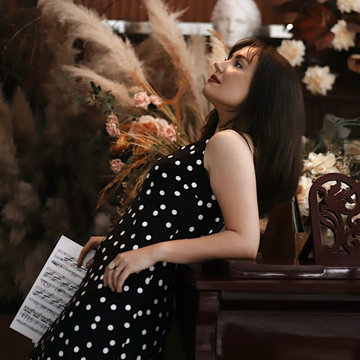 I'm a professional pianist, singer, songwriter and a composer.
3 of 6 photos
Singer
London

Evelyn is a professional pianist, singer, songwriter and a composer. She has a professional background in classical piano and contemporary singing, which she has studied for 20 years. Her teaching experience extends over 11 years: working with children in groups as well as giving private lessons to students of all ages and guiding them towards their degrees. Evelyn started playing piano and singing at an early age and was accepted to a classical music school at the age of 6. She continued her studies and later started her degree at the renowned Gnesin Academy of Music, Russia. Later she became the winner of the XIII International Festival «Musica Classica» (III Prize) and Musical Art International Competition. At the same time she was studying vocals and performing jazz. After her graduation she was awarded scholarships for participating in piano master classes : “British Isles Music Festival”( where she had lessons with Andrew Ball -Professor of Royal Academy of Music in London) and also “The river of Talents” in Saint Petersburg. In 2015 she was awarded a full scholarship to participate in Tel Hai International Piano Master Classes (Israel) with Dmitry Bashkirov, Tatiana Zelikman and others. In 2018 she graduated from ICMP (London) where she continued to strengthen her education specializing in vocals, vocal performance and composition. Evelyn is performing pianist in a classical duo with a violinist, in a contemporary duo “E&E acoustic duo”, she is finishing compositions for a few short films as well as finishing working on her debut EP as a singer.

I always try my best to be flexible to help ensure your event runs as smoothly as possible. If timings change slightly in the run up to the event just let me know

Verified
Thomas B, 1 year ago

Evelyn performed at my wedding on the 14th of September 2019. She was highly professional, good humoured, a genuine pleasure to work with! We asked for specific songs and she performed them perfectly! Guests were happy! Can't recommend highly enough.

I had the great pleasure working with Evelyn. She’s a fantastic singer, songwriter and a versatile musician. We performed together at several events and she was very professional, organised and always open to new ideas.