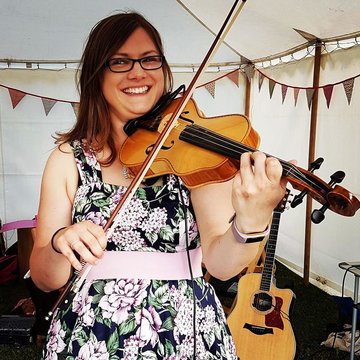 Folk Fiddle Teacher & Workshop Leader for Ely, Cambridge, Newmarket & Suffolk Coming from a background of mixed traditional and contemporary Irish fiddle playing and singing, Erin first performed in the trailblazing young group No I.D in the BBC Radio 2 Young Folk Awards Competition back in 2002. The group went on to make two CDs and played at the Cambridge Folk Festival four times sharing the stage with the likes of Show of Hands, Sharon Shannon and Martin Simpson in the Saturday Big Session on Stage Two. Over the past 20 years Erin has played with a number of ceilidh and barn dance bands but most recently has been one of the lead musicians with the formidable Stumpy Oak Ceilidh Band, who are one of the busiest and best ceilidh bands in the country. Erin is a fiddle teacher and folk music workshop leader who specialises in folk styles and techniques from England, Ireland and Scotland. Erin regularly performs with the following bands and morris sides… Stumpy Oak - Ceilidh Band Cambridge based, dancefloor-packing band of professional, experienced ceilidh and barn dance musicians. Stumpy Oak boasts an unusually large sound. Fiery fiddle, accordion and guitar are complimented by guitar sub-octaves (giving a bass guitar sound) and a stompbox (like a bass drum). Options for further instruments include a bodhran and second fiddle. Lighting is included with every booking, adding to the atmosphere. A friendly, patient caller completes the line-up to talk guests through the dance moves prior to/during each dance so that everyone knows what to do and can have fun. Erin Brown & Barry Watson As a new, exciting side project to compliment their work with the popular Stumpy Oak ceilidh band, just-south-of-Ely residents Erin Brown & Barry Watson offer lively renditions of traditional folk music featuring vocals, fiddle, stomp box and accordion (plus occasional appearances from whistles and bouzouki). Songs and tunes are taken from England, Ireland, Scotland and further afield, but the accompaniment is typically stompy and English, with the odd syncopated Breton rhythm thrown in for good measure. The Brown Family The Brown Family have been performing together since the ‘children’ were old enough to hold instruments! They started doing public gigs in the late 90s when they started performing concerts in care homes and churches in the Newmarket area. Their influences are mainly Celtic in origin and they perform well-known chorus songs and tunes from around the British Isles. Parents Roger and Marian have been interested in folk music for more years than they care to remember and Roger was a founder member of East Anglian folk bands Don’t Forget the Donkey and Clutching at Straws. Unfortunately The Brown Family don’t often perform as a four-piece band as Adam has now moved to Glasgow – he can now be seen on stage, TV and in concert around the world with his two internationally renowned bands – RURA and Ímar. Sutton Masque Sutton Masque morris dance in the tradition taken from the Welsh/English border counties. Although founded relatively recently, the group continues to build a reputation for being one of the best border morris sides in the country. In their first five years they have performed and led workshops at some of the country’s leading festivals including Towersey Festival, Chippenham Folk Festival, IVFDF, Ely Folk Festival, Sowerby Bridge Rushbearing Festival and Lobster Potties in Sheringham, as well as attending the Joint Morris Organisation (JMO) Day of Dance. You will also find them during the summer months dancing at some of the finest ale establishments around the Fenland area, and entertaining the crowds at local beer festivals…..unsurprisingly, they’ve been known to enjoy a pint themselves from time to time!

I always try my best to be flexible to help ensure your event runs as smoothly as possible. If timings change slightly in the run up to the event just let us know.

Usually set up is about 30-45 minutes before the performance time if a PA is required, otherwise it would be a matter of minutes for a solo fiddle performance.

My set lists are crafted from countless performances and learning what works best to ensure guests have an amazing time. However, I'm definitely happy to chat through and make sure we find what works for your event.

Yes - I will provide all my own equipment. If a PA system is required I would need access to a power source.

David and I thoroughly enjoyed the dancing and lots of my guests have been in touch today to say how enjoyable the evening was. Please thank Sarah; I thought she made everything really fun and was very patient and all you musicians were brilliant – thank you

Dear Barry, Erin, Sarah and Darren, I just wanted to say a HUGE thank you for playing for us on Saturday evening. You were so fantastic – so many people have asked me where we found you/how to get in touch with you! Those who have been to ceilidhs before also commented on how you’re the best band they’ve heard and had (which I too agree with!).. I really really did appreciate your help and for just generally being absolutely fab and getting everyone involved & having a great time. I’m also sorry about my questionable dance moves toward the end…(or throughout the whole night some might say!!!). Oops… Again, the biggest thank you from me and on behalf of everyone who came. You made it a blast.