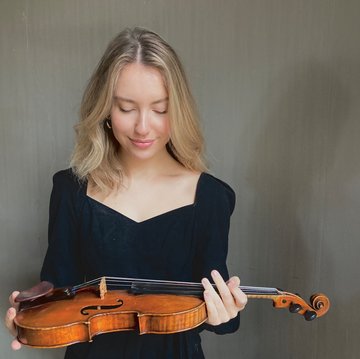 Emma began her musical life studying with Jan Repko at Chetham’s School of Music before going on to the Royal College of music in London where she stayed for a bachelor and masters degree studying with Gaby Lester. During her time at the RCM Emma was first violinist and founding member of the Vasarsa quartet. Within a couple of months of forming, the Vasara quartet won the Britten Intercollegiate string quartet competition held at the royal academy of music. This quickly led the quartet to exciting opportunities and soon after, they performed their Wigmore Hall debut. After this, the quartet continued performing for nearly 5 years with London highlights including the Royal Albert Hall, Kings Place, Conway Hall, Cadogan Hall and Wigmore hall. At 18, Emma gained a place in the European Union Youth Orchestra where her passion for orchestral playing began. She went on to tour with the orchestra for several years until 2018 when she became co-leader. Also heavily involved in orchestral playing within the RCM, Emma was concertmaster of the college orchestra on multiple occasions. In 2017, Emma gained a place on the Philharmonia fellowship scheme- a prestigious opportunity to further her professional orchestral experience. A year later, she was offered a place on the the Hallé orchestral leadership scheme in Manchester where she moved to play with the orchestra for a year. Now a successful and in demand orchestral player, Emma has played regularly with the Philharmonia Orchestra, BBC philharmonic, Halle orchestra, Liverpool Philharmonic, Britten Sinfonia and London Philharmonic Orchestra. In 2019 Emma was offered a contract as 2nd concertmaster of the Copenhagen Philharmonic and took up that position until 2020.

As well and playing beautifully, the quartet were so lovely and calm and nothing was too much trouble. The day wouldn’t have been the same without them.

Amazing playing from these lovely ladies at our annual Christmas gathering. Music made it all the more cozy!