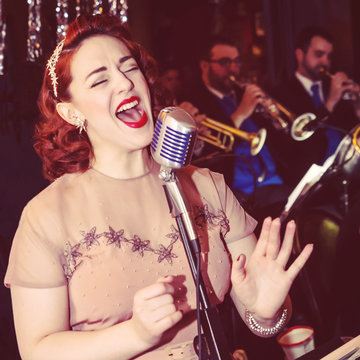 American chanteuse Elise Roth cut her teeth listening to classic recordings of the Andrews Sisters, Artie Shaw, and Glenn Miller, idolising the vocalists of the Big Band Era. Freshly arrived from the United States, she has spent the past 6 years honing her craft, singing with 18-piece Big Bands and 1920s style Jazz Orchestras — and some medium and small bands, too. Audiences who have seen her perform know that every detail is pitch-perfect, and her classic presentation is second only to her repertoire of music ranging from the 1920s Jazz Age through the 1950s. She is often compared vocally to Helen Forrest, Rosemary Clooney, and especially Judy Garland. Most recently, she has been proud to debut her own band, Elise Roth & Her Harvard Squares at several dance events and vintage parties, and notably in February 2019 at the Cicada Club in Downtown Los Angeles.

After You've Gone
Ain't Misbehavin'
All the Things You Are
Almost Like Being in Love
Am I Blue?
Bei Mir Bist Du Schoen
Blue Skies
But Not For Me
Can't We Be Friends?
Cheek to Cheek
Comes Love
Deep in a Dream
Deep Purple
Don't Blame Me
Don't Get Around Much Anymore
Drop Me Off in Harlem
Easy Living
How About You?
I Ain't Got Nobody
I Can't Give You Anything But Love
I Found A New Baby
I Got Rhythm
I Know Why And So Do You
I Was Doing All Right
I'll Be Seeing You
I'm Beginning To See The Light
I've Heard That Song Before
It Could Happen To You
It's Been A Long, Long Time
Jeepers Creepers
Love Me Or Leave Me
Lullaby of Birdland
Massachusetts
Mean To Me
Mood Indigo
Night and Day
Paper Moon
Sentimental Journey
Sit Right Down & Write Myself A Letter
Smoke Gets In Your Eyes
Someday Sweetheart
Stormy Weather
Somewhere Over The Rainbow
Swanee
St Louis Blues
Taking A Chance on Love
The Glory of Love
The Man That Got Away
The Trolley Song
We'll Meet Again
When I Take My Sugar To Tea
You Made Me Love You
You'll Never Know
Zing! Went The Strings Of My Heart
Customer questions

No worries, please let us know as soon as possible and we'll accommodate the change.

We usually set up about an hour before the gig; if there are more logistical factors or a larger ensemble, we can be there earlier! Of course if there is a specific time requested, we can do our best to accommodate.

If there are specific songs you'd absolutely like to hear, do let us know! We cater our set lists to the style and era of music we're performing, as well as the desired vibe of the event.

Yes, absolutely! Unless the venue is specifically for performance, in which case we will get in touch to see what equipment the venue prefers to use.

Yes, although there is a chance I know it already! If it's a specific arrangement or style that is not in my usual repertoire, there will be a small additional charge to account for rehearsal time etc.

Standard Prices
All prices include:Please contact for a custom quote; all prices include vocalist and live accompaniment, no backing tracks.
Packages
Vintage Jazz Duo
Duo of vocalist and guitar or piano; 2 x 45 minute sets.
£250
Vintage Jazz Trio
A jazz trio consisting of vocalist, guitar/piano, and either bass or horn depending on client's request. 2 x 45 minute sets.
£400
NEW!Virtual services
Personalised Music Message
Book me to create a unique music video for you to send to a friend as a gift. This could be a birthday message, first dance song for a wedding anniversary, or just your friend's favourite song to cheer them up.
£15
Elise

DL
David L
2 years ago, for a Bar / Club / Venue event in Dalston

Elise Roth and her Harvard Squares gave us more of the music we love dancing to last night. With only bass, guitar and trumpet to back her, Elise was on top form. Her vocal range is truly amazing. At one point she even went into Louis Armstrong mode. She certainly had his sound but, fortunately for her, not his looks. What's more she filled the place to overflowing. Finding enough space to swing out without bumping my follow was the main challenge of the night!

KN
Kerri N
2 years ago, for a Bar / Club / Venue event in Dalston

Oh what a night! Absolutely splendid, fabulous band. Elise Roth was in fine form along with her dapper Harvard Squares. Tiger Rag was swinging..... Thank you to everyone for making it sizzle!