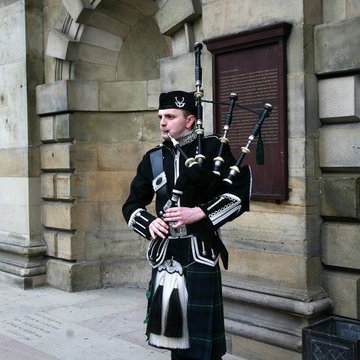 Eddie lives in Glasgow and is a graduate of the Royal Conservatoire of Scotland.
Bagpiper
Glasgow
Verified profile

Eddie comes from Edinburgh and began playing the pipes at school at the age of 10. Shortly after he joined the school band and had the opportunity to travel America and Europe and future regularly in the prize list at the junior solo competitions. After leaving school he completed a BA in Scottish Music at the Royal Conservatoire of Scotland before heading out on the road with the newly formed folk band Barluath. Barluath traveled extensively around Britain, Europe and America and were nominated for "Best Up and Coming Artist" and "Folk Band of the Year" at the MG Alba Scottish Music Awards. Eddie is now completing a MA at the Royal Conservatoire of Scotland and has completed sveralhigh profile solo performances on the bagpipe including Strictly Come Dancing, The London 2012 Olympics and River City.

Very professional performance.Booked for my brothers wedding reception.We had some African guests who were very impressed and Eddie was very obliging having his photos taken

‘Tirade’ takes you through blistering ‘how do they play that fast?’ tunes, gently appealing airs and quietly reflective songs.