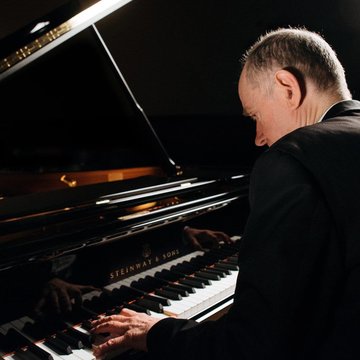 I am a New Zealand born, British resident composer, orchestrator, conductor and record producer with 27 award-winning IMDb film/tv credits and 35 Discogs recording credits. As an activist, I am also known for my Save Sibelius campaign in the United Kingdom (2012-2013). Since 2007, I have served as lecturer/tutor on the Associated Staff of The University of Edinburgh Music Department, teaching Composition and Orchestration. I am Chair of the Wagner Society of Scotland, a member of the International Association of Wagner Societies, where I have delivered three lectures on Richard Wagner, viewable online. As arranger, orchestrator, conductor and musician for international artists Caroline O'Connor, Sir Robert Helpmann, Torvill and Dean, Grace Knight, Frank Bennett, Debbie Newsome, Sir Howard Morrison and prominent Australian screen composers Martin Armiger, Guy Gross and Antony Partos, I am also known for my reorchestrations of tracks from hit records. My works have been performed in the Royal Albert Hall, Garrick Theatre and Kings Place (London), at the Sydney Opera House and Hamer Hall, Melbourne, Australia, and at the Montreux Jazz Festival; as a chorister, I have performed at The White House, Lincoln Center for the Performing Arts, John F. Kennedy Center for the Performing Arts, Westminster Abbey, and King's College Chapel, Cambridge. I was the orchestrator and conductor of the Victorian Philharmonic Orchestra for Guy Gross's score for Stephan Elliott's Frauds, starring Phil Collins and Hugo Weaving, and his Oscar winning film The Adventures of Priscilla Queen of the Desert, and for Martin Armiger's score for The Crossing, starring Russell Crowe. I was orchestrator for Antony Partos's score for Crush, winner of Best Film Score at New Zealand Film and TV Awards, and was arranger and conductor for the Australian Broadcasting Corporation multi-platinum album Vince Jones & Grace Knight ‎- Come In Spinner from the ABC miniseries Come In Spinner for record producer Martin Armiger. My most recent film score was for Ruaridh M Turner's The Beast in the Storm, which won Order of Merit in the Indie Fest and Best Action/Thriller/SciFi - Los Angeles Independent Film Festival Awards.

A Taste of Honey
A Time for Us
Alfie
All I Ask of You
All My Lovin'
All The Way
Almost Like Being In Love
And I Love Her
And I Love You So
Anitra's Dance
Anniversary Song
Anniversary Waltz
As Time Goes By
Autumn Leaves
Bach prelude
Bach short piece
Beautiful Dreamer
Because Of You
Believe It Or Not
Blame It On The Bossa Nova
Blue Moon
Bonnie & Clyde
Brazil
Bridge Over Troubled Water
Bright Eyes
Bring Him Home
By The Time I Get To Phoenix
Cavatina
Climb Ev'ry Mountain
Close To You
Crazy
Dance of the Siamese Chiildren (King & I)
Do You Know The Way to San José?
Don't Cry For Me, Argentina
Don't Get Around Much Anymore
Edelweiss
Eleanor Rigby
Exodus Theme
Fascination
Feelings
Fernando's Hideaway
Fly Me To The Moon
Fools Rush In
Getting To Know You
Girl From Ipanema
God Bless The Child
Green Green Grass of Home
Hello Young Lovers
Hi Lily Hi Lo
How Deep Is Your Love?
I Am Sailing
I Can Show You The World
I Could Have Danced All Night
I Don't Know How To Love Him
I Just Called to Say I Love You
I Whistle A Happy Tune
I'm In The Mood For Love
If
Imagine
It Was A Very Good Year
Just The Way You Are
Killing Me Softly With His Song
La Cumparsita
La Vie En Rose
Ladybird
Lilli Marlene
Love Is A Many Splendoured Thing
Love Is Blue
Love Story
MASH
Masquerade
Meditation
Memory
Michelle, Ma Belle
Midnight In Moscow
Misty
Moon River
Moonlight Serenade
More
Morning Has Broken
Music Box Dancer
Music Of The Night
Music To Watch Girls Go By
My Favourite Things
My Life
New York, New York
O My Beloved Father
Oh, What A Beautiful Morning!
On The Street Where You Live
Over The Sea To Skye
People
Piano Man
Quando Quando
Right Here Waiting
Satin Doll
Send In The Clowns
Slightly Out Of Tune
Some Enchanted Evening
Someone To Watch Over Me
Something
Sometimes When We Touch
Somewhere, My Love
Song For Guy
Sophisticated Lady
Sorrento
Sound of Music
Spanish Eyes
Stardust
Stranger On The Shore
Strangers In The Night
Student Prince extracts
Summertime
Sunny
Sunrise, Sunset
Swanee River
Take Five
Tears In Heaven
The Breeze And I
The Entertainer
The Greatest Love of All
The Loveliest Night of the Year
The Man From Snowy River
The Man That Got Away
The Rose
The Sound of Music
The Way We Were
Three Times A Lady
Titanic Theme
Try Not To Get Worried
Unchained Melody
Under My Skin
Wave
When You Wish Upon A Star
Where Has My Highland Laddie Gone
Whispering
Wichita Lineman
With A Little Help From My Friends
Words
Yesterday
You'll Never Walk Alone

Derek is an exceptionally talented, enthusiastic and passionate musician. He is someone who will work tirelessly to create something that both he and his clients are proud of, never falling short of this standard. An expert in his craft and a fantastic collaborator, Derek is reliable and highly knowledgeable of music software and workflow. (He keeps the backups of the backups, so you're always in safe hands!) I look forward to working with him in the future. Very highly recommended.

Kicking off with a superb waltz by Derek Williams, the piece was off-kilter enough to make you hang on every note, yet with touches of traditionalism that evoked images of Viennese ballrooms. (Edinburgh Festival Fringe: 'Colours' by Royal Conservatoire of Scotland & Edinburgh University)